We're one week away from Yankees Opening Day, people.  This time next week we can put aside the talk of velocity, platoons, injury concerns, and roster battles and just kick back and watch some baseball, which is awesome.  I still have to figure out how I'm going to watch the game, since I'm a cheapskate and don't have any kind of MLB viewing package on my TV or computer.  But at least I won't have to miss the game because I'm stuck at work.  Good Friday indeed!  Onto the links.

- On Monday, Ran Shulman of Yanks Go Yard welcomed D-Rob back to the bullpen by giving a refresher course on just how nasty Robertson was in 2011 and how valuable he is for 2012.

- On Tuesday, Rebel Yankee Chick flirted with the Dark Side by taking the Fenway Paahhk tou-ah.  She gave it a positive review.

- Trevor Wolff of Sliding Into Home posted a friendly reminder to not dismiss the Yankees' relief pitching prospects.  Given how good some of them have been early in their careers, I would have to agree with Trevor.

- Rob Steingall of Pinstripe Alley offered up his picks for prospects he'll be keeping a close watch on this season, and I commend him for picking guys outside the normal group.

- Joe Pawlikowski of RAB debated whether the Yankees should trade or hold some of their players who have been drawing interest from other teams, specifically Freddy, Ramiro Pena, and Justin Maxwell.

- On Wednesday, Bryan V of The Greedy Pinstripes explained why he feels Russell Martin is the most important player in the Yankee lineup, at least from a health standpoint.  I can buy that.

- Greg Corcoran of Bronx Baseball Daily scoured the Yankees' MiL affiliates to identify the players who he thinks could be fast risers through the system this season.

- Matt Filippi of Beyond the Box Score offered his 2012 season preview for the Yankees, touching on their improved rotation and age concerns in the lineup.

- On Thursday, Jamie Insalaco of Bomber Banter made his 2012 predictions.  He sees rebounds for Hughes and The Horse and another AL East title for the Yankees.

- Hippeaux of IIATMS discussed the trend in baseball of shuffling guys from the bullpen to the rotation, touching on the Yankees' recent following of the trend with Hughes and Joba.

- Fishjam25 of Yankees Fans Unite looked at the evolution of the Yankees' strategy when building their rotation and the shift to focusing more on homegrown pitching talent.

- Dave Schoenfield of ESPN's Sweet Spot set the over/under for Yankee wins at 93.5 and inquired about their ability to reach 100.  I'm not sure about 100, but I would definitely take the over on 93.5.

- Today, Mike Eder of TYA crunched the numbers on Teix's ST at-bats to show just how much he's focused on hitting the other way from the left side.  Hopefully that carries over to the regular season and translates into an overall improvement in his stats.

- Mike did the same thing on Wednesday with Phil Hughes' batted ball profile to show the improvements in Hughes' game this spring. 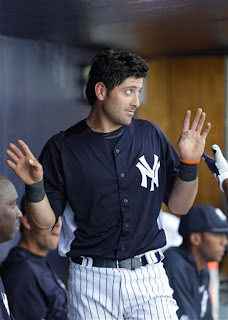 Will There Be Any Friday Funny Business Today?

2 weeks ago Friday it was Andy's comeback.  Last Friday it was Joba's failed attempt to be an Olympic gymnast.  So what's in store for us today?

I'm almost scared to check LoHud for news updates.  I'm afraid it's going to be something like Larry Rothschild getting kidnapped by Colombian drug lords or Curtis Granderson suddenly going blind.  Hopefully it can just be a nice calm day and we can continue to talk about finalizing the rotation order and why Michael Pineda isn't throwing 200 MPH.