The GCL season got started last night, with the Yankees now sporting 2 full squads.  You may have noticed that I didn't preview these teams before the season like I did with the Staten Island Yanks, and that's because after botching the Jordan Cote assignment I didn't want to take any more chances misspeaking about players.  The GCL rosters hadn't been announced prior to the start of the season, as is usually the case at this level.  The teams are made up of a combination of the HS guys from last year's draft, new draftees from this year's draft, young international free agent signings, and higher level guys rehabbing injuries.  Now that each team has gotten a game under its belt and we have an idea of what each roster is going to look like, here's what and who you should watch for.

The Yankees send their ace out today to try to get a leg up in this 4-game series.  If CC is able to help them get a win today, they'll then be sending their 6th starter out to try to lock down the series victory tomorrow.  Due to the rain delay and Tuesday doubleheader earlier in the week, the Yankees need that 6th starter and it will be Ivan Nova who gets the call tomorrow instead of Kuroda or Hughes on short rest.

Nova has been the forgotten man since hitting the DL in late April.  He's lost his spot in the rotation to David Phelps and looked on the verge of losing the 6th man role until Vidal Nuno tweaked his groin recently.  He last appeared in the Majors in a 5-inning, 1-run relief effort in late May, and since then he's pitched pretty well in the Triple-A rotation (2.04 ERA/2.69 FIP over 17.2 IP in 3 starts).

The message sent by the Yankees in how they've handled Nova since he came off the DL is that they don't have a lot of faith in him, and tomorrow's start is highly unlikely to be anything more than a necessary spot start before he's sent back down.  But with the way Hughes has struggled and with Andy's back always a concern, you never know.  If Nova tosses a gem (also highly unlikely) maybe he forces his name back into consideration with Pineda still a few weeks away.
Posted by Unknown at 9:59 AM No comments: 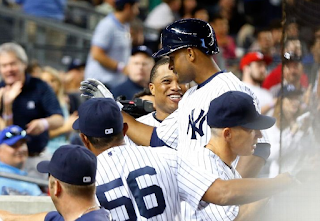