Mo is my clear cut sentimental favorite athlete right now because of his pending retirement, and he's easily my 2nd or 3rd favorite athlete all time, but in terms of entertainment and rooting for them to do well my top 2 guys right now are Alex Rodriguez and Johnny Manziel.  The 2 biggest heels in the American sports media and I can't get enough of them.  What does that say about me as a sports fan?  What does it say about me as a person?  I'd like to think it means I'm smart enough to not get caught up in ESPN's constant anti-A-Rod and anti-Manziel shitstorms and evaluate their transgressions rationally and objectively, but maybe it's more than that.  Maybe I just like rooting for the bad guy.  Maybe I am a bad guy.  Do I need to adopt my own heel blogging persona?  Lot to think about here, mainly how fantastic it would be if A-Rod and Manziel could somehow play on the same team.

- On Monday, Jason Evans of Yanks Go Yard asked if we'd be seeing Brendan Ryan back as the starting shortstop next year.  I certainly hope not, although I would prefer him over Nunez for the backup role.

- On Tuesday, Mike Axisa of RAB laid out the rationale behind the Hughes-Huff tandem starter format Joe's using for the 5th rotation spot.  Can't blame him for trying something different.

- Derek Albin of Pinstripe Pundits commented on Chris Stewart's historically brutal 2013 and the outside forces that combined to make that brutality possible.

- Greg Corcoran of Bronx Baseball Daily examined the holes on the 2014 roster and how Tyler Austin could fit into the roster construction plans.

- On Wednesday, EJ Fagan of IIATMS/TYA came up with a formula for measuring the best hitting environments for Minor Leaguers and applied that formula to show where the Yankees rank in organizationl hitting environment.  The results may surprise you and may provide an explanation to why they've failed to produce quality hitting prospects in recent years.

- Bryan Van Dusen of The Greedy Pinstripes commented on the disappointing final season results for Mo and Andy. You know both guys were envisioning a final playoff run when they decided to come back.

- SG of RLYW projected the postseason odds over the final 11 games assuming different winning records.  The chances didn't look good before the end of the Toronto series.

- On Thursday, William Juliano of The Captain's Blog ran through virtually all of the potential AL East postseason tiebreaker scenarios.  Hard to see the Yanks factoring into that picture after last night.

- On Friday, Chad Jennings of LoHud had all the details on this weekend's plans for Mo.

- Harlan Spence of Pinstriped Bible broke down Brett Gardner's 2013 season to show why he might not be an ideal candidate for a contract extension.

- El duque of It Is High... started firing off questions that need to asked about next season and still haven't been answered relative to this season.

- SJK of NoMaas continued to bang the drum about the below-average bats the Yankees acquired for multiple years.  People may not like it, but it's something that needs to be revisited time and time again.  No way that plan gels with Hal's commitment to fielding a championship-caliber team.

Got some new music for this week's jam, specifically the new Red Fang track "Blood Like Cream."  New album out next month, no reason to expect it to be any less rocking than the last one was.

Andy Pettitte To Retire (Again) After This Season

From the man himself:

“I’m announcing my retirement prior to the conclusion of our season because I want all of our fans to know now—while I’m still wearing this uniform—how grateful I am for their support throughout my career. I want to have the opportunity to tip my cap to them during these remaining days and thank them for making my time here with the Yankees so special.

I’ve reached the point where I know that I’ve left everything I have out there on that field. The time is right. I’ve exhausted myself, mentally and physically, and that’s exactly how I want to leave this game.

One of the things I struggled with in making this announcement now was doing anything to take away from Mariano’s day on Sunday. It is his day. He means so much to me, and has meant so much to my career that I would just hate to somehow take the attention away from him.”

It's never as big a deal the second or third time around, but it's still newsworthy that another member of the Core Four is hanging 'em up.  This one is especially newsworthy simply because Andy, like Mo, proved he can still get it done this season and the Yankees could definitely use him in next year's rotation.  Oh well, that's 40% that needs to be replaced with Kuroda still up in the air.
Posted by Unknown at 12:24 PM No comments: 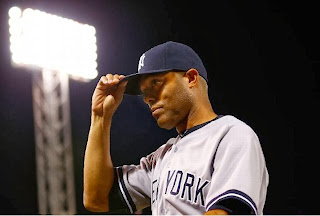 Tonight marks the start of the final homestand of the 2013 season for the Yankees, and with it the all but certain final 6 home games of Mariano Rivera's career.  After 573 regular season games, 653.1 innings pitched, and over 2600 batters faced inside the hallowed walls of the old Yankee Stadium and fancy schmancy walls of the new Yankee Stadium, the finish line on Mo's long and illustrious career is in sight and the first big milestone is a mere 6 days away.

It was a surreal feeling watching him run out of the bullpen a few weekends ago, and I imagine that feeling will be 10 times greater this weekend.  Mo has pitched what comes out to over 72.5 full 9-inning games at Yankee Stadium, and now he's down to his final few innings.  All the cutters, all the strikeouts, all the broken bats.  Not many more of them left to see and it still doesn't feel quite real.

There is a ton of stuff planned to celebrate Mo's career and retirement this weekend and all of it should be spectacular.  But nothing will ever equal the awesomeness of just watching Mo work.  I know I'll be parked on my couch on Sunday afternoon, hoping to get one more chance to watch him jog out to "Enter Sandman" and close out a game.  There isn't much left for the Yankees to play for this season.  Making this weekend count with some wins and sending Mo out on the highest note possible should be the top priority.
Posted by Unknown at 10:00 AM No comments: 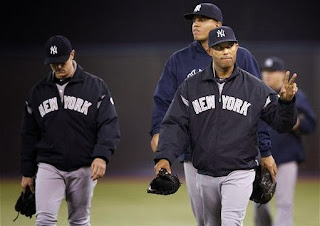 (Deuces, Toronto.  It's been real.  Courtesy of the AP)

The whole season in a nutshell last night.  Shaky starting pitching, minimal, inconsistent offense, and a leaky bullpen late when the team needed it the most.  Hiroki Kuroda got the latest start to save the season last night and he didn't pitch any better than he has been since mid-to-late August.  His lineup didn't give him much support and the fat lady is finishing up her scales before she takes the stage.

- More bad than good from the offense early.  Alfonso Soriano ran himself out of a base hit to start the top of the 2nd, then Lyle Overbay ended it with a double play.  And Todd Redmond struck out the side in the 3rd around a, go figure, Chris Stewart 2-out double.

- Hirok danced out of trouble with a bizarre rundown double play to end the 1st and escaped 2 on in the 2nd, but he wasn't sharp.  He cracked on a leadoff single and Jose Reyes triple in the bottom of the 3rd and he let that run come around to score to make it 2-0 Toronto.

- It took a while again, but the Yankees got on the board late.  With 1 out in the 6th and 2 strikes, Redmond left a sinker belt high to Curtis Granderson and the Grandyman yoked it to a right for a home run to cut the lead in half.

- The momentum of that homer was short lived.  With 2 outs in the bottom half, Hirok gave up a solo shot of his own to Anthony Gose on a slider that just didn't get down enough.  He had struck out the previous 2 batters and looked like he was heading for a quick inning.  Crushing blow.

- I'm sure he felt he had his reasons, but Joe should have never brought Joba Chamberlain into a 2-run game in the 7th.  He did, and Joba gave up a leadoff walk, a single, and a monster 3-run home run to Adam Lind to make it a 6-1 game.  Death blow.

- Fitting ending for the offense.  They loaded the bases with 1 out with the heart of order in the top of the 9th and watched that turn into only 1 run as Vernon Wells and Lyle Overbay grounded out.