As we approach the quarter pole of the regular season, the Yankees have fallen back to .500 and the middle of the pack in the AL East.  They've lost 4 in a row and 9 of 13, leaving them with a 19-19 record and a -18 run differential that is 3rd worst in the AL behind the Astros and the Rangers.  A few weeks ago, when they were playing better baseball and winning, the negative run differential was downplayed because of the small sample size of games.  Now that the sample has grown, a split of those 38 games shows a disturbing trend:

Based on that split, the Yankees have basically played the same brand of baseball since Opening Day.  They've scored more runs and given up more runs over the last 19 games, but it's basically been below-average baseball and that's reflected in the matching run differentials.  They outplayed their run differential in the first 19 games and won a few games more than they should have and they weren't able to do that over the last 19 games, which is why they are where they are with a .500 record.

If luck wasn't on their side in the first 19, we'd probably be looking at a 17-21 team that's perfectly in line with its Pythagorean-expected record.  Considering all the injuries that have happened in the last 19, that doesn't exactly bode well for the future.
Posted by Unknown at 11:00 AM No comments:

So You Remember What I Said About Al Aceves Last Week?

You know, about how he could actually help the team?

"Aceves is not old at 31, he's fully healthy, he's made changes to his pitching approach, and he's got experience pitching and pitching well in Yankee Stadium. Maybe he's got another year of '09 magic left in that arm. If so, the Yanks may have just solved their biggest bullpen problem."

Yeah, forget about that.  3 appearances since that 5/4 outing and here's his line in those 3 appearances: 4.1 IP, 8 H, 7 ER, 3 BB, 2 HR, 5 K.  Aceves has sucked big time and he probably pitched himself out of a roster spot last night.  The Yankees are calling up Chase Whitley to make the final start of this series on Thursday and they'll need to make a 40-man roster move.  DFA'ing Aceves would be a simple and smart move to make.

Sorry if I got anybody's hopes up with that post last week.  That one's on me, guys.  Do you want me to say I fucked up?  I fucked up.  Write it. 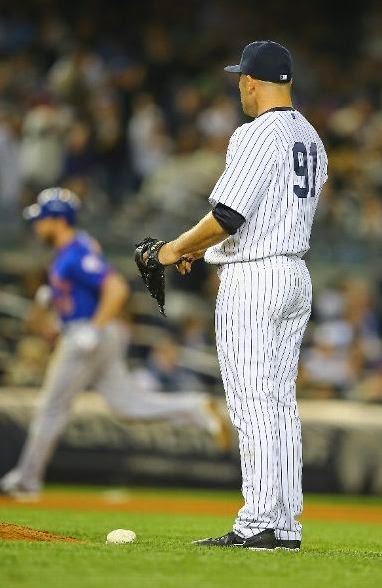