That's a serious question.  I'm not ashamed to admit that I didn't realize Derek Lowe was still wallowing away on the free agent market.  I assumed some team had already snapped him up on a MiL deal after his surprisingly strong late-2012 stint with the Yanks.  Came to find out he's still out there thanks to Axisa's little update blurb on him yesterday when Lowe said he would be willing to come out of the bullpen.

I definitely wouldn't be interested in Lowe on anything more than a MiL deal, and I wouldn't expect him to make the Opening Day roster, but he could be valuable in multiple scenarios for the Yankees.  At best, he could do what Axisa would like him to do and serve as the swingman and 7th reliever in the bullpen, freeing the lose of the Nova-Phelps competition up to go down to Triple-A to stay stretched out as a starter for the eventual injury that will come up.  At worst, he decides to stay in Triple-A after camp ends and serves that cheap veteran innings-eater function I was talking about yesterday.

Lowe might still be holding out for a Major League offer, counting on other injuries in another camp inspiring teams to give him a look.  But if he doesn't get any, and still wants to play, he should be willing to take a MiL deal as much as the Yankees should be willing to offer him one.
Posted by Unknown at 4:13 PM No comments:

Nothing To See Here, Folks... 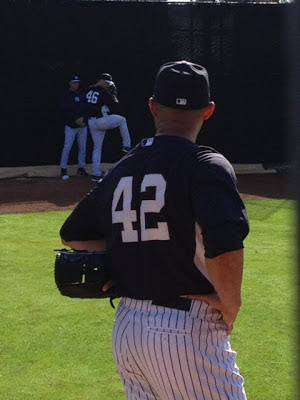 Nope, nothing at all.  No big deal.  Just the 2 best pitchers in the last 30+ years of Yankee history doing their thing in the bullpen.  That's a pretty everyday occurrence right there.  Probably discussing the finer points of the cutter and counting their World Series rings.  Moving on...

(Photo courtesy of Erik Boland)
Posted by Unknown at 11:51 AM No comments:

With almost every other pitcher still in the earliest phases of their Spring Training routines, Michael Pineda has dominated the headlines with the positive reviews he's gotten from his rehab work.  But there's another pitcher also on the comeback trail who's worth keeping an eye on, and that's lefty Cesar Cabral.  You might remember Cabral as one of last year's Rule 5 draft picks who came to camp and impressed the coaching staff.  He actually had a leg up on Clay Rapada for the 2nd LOOGY job, and probably would have won it were it not for the fractured elbow he suffered late in camp that caused him to miss all of 2012.

Via Chad Jennings, Cabral was also out on the mound yesterday and threw a 25-pitch session that drew positive feedback from Joe.  Like Pineda, Cabral won't be ready for the opening of the 2013 season, but his return should come much earlier as a reliever and could be a blessing if there are problems with Boone Logan.  George King reported yesterday that Logan had a wrap on his arm after throwing long toss and Larry Rothschild confirmed that the Yankees "are being cautious with him" this spring.  The first few days of ST are hardly the time to be cautious with a pitcher who isn't hurt, and this approach is a sign that there's concern about Logan's health after his heavy 2012 workload.  Cabral's presence not only gives the Yankees the opportunity to be cautious with Logan, but also to have another lefty option should Logan end up on the DL.

The Yankees could have very easily cut bait on Cabral last year after he missed the season, and it would have been perfectly understandable given his injury and the fact that they added more LOOGY depth to their system.  But they kept him around, brought him back to camp this year, and barring another injury will have him available should their bullpen require another lefty arm.
Posted by Unknown at 9:22 AM No comments: