Why Is Curt Schilling Still Talking? 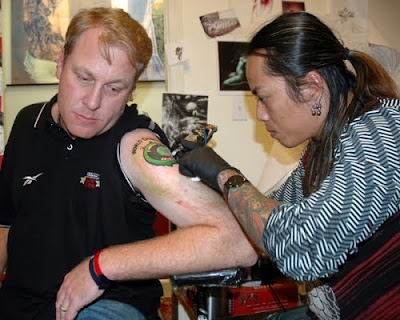 (Asshat)
Somebody please get Curt Schilling off the airwaves and stick an X-Box Live headset on him if he wants to run his mouth. The World's Foremost Authority on Everything sounded off on Javy Vazquez and his struggles yesterday on Colin Cowherd's radio show.

"You're seeing what you're gonna get from him consistently all year. Having said that, he could turn around next week and throw a one-hitter with his stuff. I just don't see him being a consistent winner in the American League."

"It's hard to say this without sounding disrespectful and I don't mean it that way -- the National League is an easier league to pitch in, period. And some guys aren't equipped to get those same outs in the American League, and he's one of those guys." (used courtesy of the NY Post)

Now don't think I'm using this to run to Vazquez's defense. I'm already on record as one of the first to boo the shit out of him this year and I really don’t think there is a way to justify how awful he has been, especially when he currently sits last in the Majors in ERA amongst the 115 pitchers who have thrown enough innings to qualify.

Oh no, I am using this simply to call out Schilling for his continued idiocy and penchant for running his mouth about things he knows nothing about even after his playing career has long ended. Look, Curt, you can't say that the awful performances we have seen so far are going to be Javy's consistent output for the year and then turn around in the next sentence and say he could throw a one-hitter his next time out. That right there is the exact opposite of consistency. Pick one.

And as far as being equipped to get outs in the NL versus the AL, let's take a look at the numbers, shall we? Javy in 9 NL seasons: 90-93 record with a 3.58 ERA. Now Javy in 5 AL seasons: 53-49 record with a 3.21 ERA. Now maybe my vision is off after sleeping with my contacts in for 3 days in a row, but those AL numbers sure look like a higher career winning percentage and a lower ERA to me. Neither set is Hall of Fame-worthy, but what they do show is that Vazquez has been consistent in his performance regardless of which league he's pitching in. Vazquez has pretty much been the same pitcher whether it's the NL or AL, with his AL numbers actually being better over his career.

Your opinions are all well and good, Curt, but the numbers don't lie. Now Javy has sucked mightily so far this season and as the year moves forward I am sure he will suck plenty more times. But to suggest from a sample of 4 outings when the guy is obviously pitching without his best stuff that he's incapable of pitching in the American League when a simple check of the numbers proves otherwise is completely insane.

Javy needs to sack up and get his shit together, that's a fact. But sooner or later you have to figure that's going to happen. Schilling, on the other hand, needs to finally shut up once and for all. There's no reason for somebody so out of touch with reality and too tuned in to the sound of his own voice and creating false controversy to be spouting off on ESPN radio; they already have enough of that. If somebody needs advice on how to gain more mana in World of Warcraft, then by all means, Curt, speak up. But if it's anything other than that, do us all a favor and keep your mouth shut.
Posted by Unknown at 2:16 PM No comments: 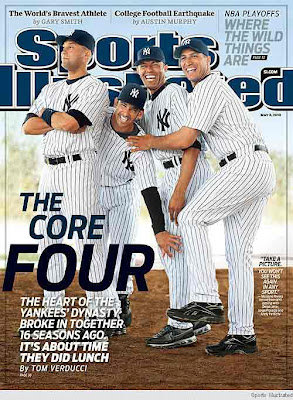 How's that, America?  You likin' that shit, Fraud Sox Nation?

That's a little Core Four right in your eye.  Enjoy it.

This will instantly become my favorite issue of SI ever when I finally get it in the mail.  Matter of fact, I'm ditching out of work right now to go camp out in front of my mailbox to wait for it.
Posted by Unknown at 11:17 AM No comments: