The lead-in to this week's Linkapalooza was supposed to be me talking about my company's upcoming holiday party tomorrow and all the shenanigans I was planning on getting into before, during, and after said party, but that hardly seems appropriate given the events that have taken place in Newtown, CT this morning.  As a Connecticut boy, this tragedy really hits home even if I don't know anybody directly affected, which is something I can't even say with 100% certainty right now.  It just sickens me that human beings as a species have devolved from building this planet up to what it is today, with all the technology and all the advancements we've created, to the point where a person can willingly decide to stroll into an elementary school and mass murder a bunch of harmless, defenseless children.

This next statement is a knee-jerk reaction, I'll admit that, but part of me thinks that maybe it wouldn't be such a bad thing if the world actually did end next Friday.  At least then we wouldn't have to continue to have things like this happen.  And with that, onto the links.

- On Monday, Jimmy Kraft of Yanks Go Yard wondered if a contact-oriented outfield would really be that bad for the Yankees.  A pertinent question to ask given their connection to Ichiro.

- On Tuesday, Steve Lombardi of Was Watching weighed in with his thoughts on the secondary ticket market issue after the Yankees ended their relationship with StubHub.

- SJK of NoMaas was right on top of his Photoshop game, as usual, when it came to the Kevin Youkilis signing and "traitor" cries coming from Fraud Sawx Nation.

- On Wednesday, Mike Axisa of RAB, on the heels of the Kevin Youkilis signing being announced, looked at how Youkilis' offensive game might translate to Yankee Stadium.

- Jesse Schindler of Bleeding Yankee Blue asked if it was to the Yankees' benefit to re-up with Phil Hughes now.  Personally, I'd like to see how he starts 2013 before entertaining that idea, but I also wouldn't hate it if they did.

- Jane Heller of Confessions of a She-Fan had a great idea for a new buddy comedy now that Youkilis is on his way to becoming a Yankee.  I'd pay to see that flick.

- Chad Jennings of LoHud broke down the currently full 40-man roster to determine who's going to be kicked off to make room for Youkilis and Ichiro.

- Jimmytoucan of Yankees Fans Unite mused on the need to stay grounded when evaluating and talking about prospects.  Very simile to the "Dangers of Prospect Hugging" post I wrote this time last year, and a lesson that's always good to bring back up.

- William Juliano of The Captain's Blog investigated the possible decrease in power, the biggest staple of the Yankee lineup, in 2013 based on this offseason's moves.

- On Thursday, el duque of It Is High... predicted bad things for this time next offseason based on the way this offseason has gone and how this team is presently constructed.

- Mike Eder of TYA looked back at Ichiro's recent performance in an attempt to project him moving forward.

- Brien Jackson of IIATMS responded to the growing complaint that the Yankees aren't getting better this offseason by asking if they're actually getting worse.

- On Friday, Marc Normandin of Pinstriped Bible looked at the comparison of Kevin Youkilis to Yankee fan favorite Paul O'Neill.

I don't feel right picking a song to play based on what happened today, so no Friday Jam.  I just hope everybody back home is safe and sound and has gotten their children to safety if they have kids, and my deepest condolences go out to all the victims of this despicable crime and their families.

Enjoy your weekends, everybody.
Posted by Unknown at 12:51 PM No comments: 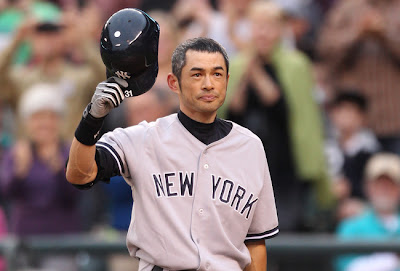