Is it a foregone conclusion that Henrik Lundqvist will win the Conn Smythe if the Rangers win the Cup?  I feel like that's the way the media will push it as the series progresses, and in fairness Hank has been dynamite this postseason, but I think Ryan McDonagh could swoop in and steal it with another 10+ point performance in the finals.  The guy was money in the ECF, absolutely the best defenseman on the ice every game of the series and the best player period on the ice for stretches.  If he finishes the playoffs with 25-ish points, a positive plus/minus, and helps shut down what will be a very deep and dangerous offensive opponent no matter who comes out of the West, he's at least got to be in the discussion, no?  Guess we'll find oot.  Now onto the links!

- On Monday, SJK of NoMaas pointed out the illogical bullpen decisions by both managers in the Yankees' Memorial Day extra-inning victory over the Cards.

- On Tuesday, Mike Axisa of RAB mused on how John Ryan Murphy is helping the Yankees in the now and in the future with how he's played since coming up.

- Matt Provenzano of Pinstripe Alley laid out the organizational relief pitching depth for the full-season MiL teams in preparation for the upcoming MLB draft.

- On Wednesday, Derek Albin of Pinstripe Pundits analyzed the numbers and their similarities to the last 2 seasons to show why we shouldn't be as concerned about Hiroki Kuroda as most are.

- El duque of It Is High... set this Sunday as the deadline for knowing where Beltran and Teix stand with respects to their health so that the Yanks can start making alternate plans quickly.

- Michael Eder of IIATMS/TYA noticed some new trends in pitcher approach that may be factoring into Yangervis Solarte's recent regression.  Way more useful than me pointing out that he's slumping.

- On Thursday, Chad Jennings of LoHud took a lineup spot-by-lineup spot look at the offense to see where the Yanks are getting the most and least.

- John Balas of The Greedy Pinstripes touched on the things that have stood out to him over the first third of the season.

- On Friday, SG of RLYW summed up my feelings about the Nunez-Hughes reunions this weekend better than I ever could.

Going with a little "Cheap Sunglasses" for this week's jam.  The Sword actually does a pretty sweet cover of this song, but you gotta stick with the original. 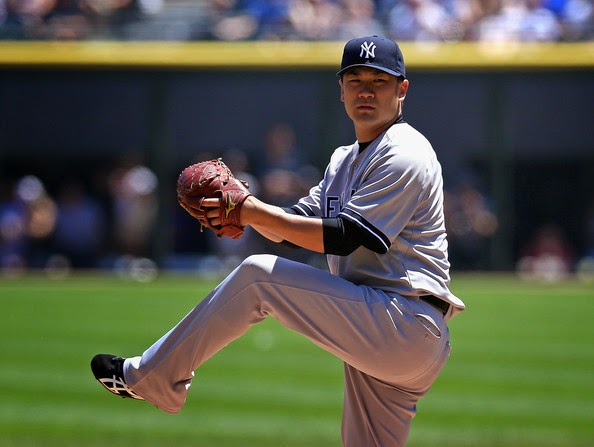 Here they are, quick and dirty:

- Teix: Saw his surgeon in New York yesterday, who took an Ultrasound and didn't see anything.  The injury is still being called "wrist inflammation" and Teix's status for tonight's game is unknown.

- Beltran: Took soft toss in the cage yesterday, 25 swings each from the right and left side.  Felt no pain, scheduled to do this again today.

- Pineda: Scheduled to pitch in an intrasquad game in Tampa on Sunday.  No word yet on pitch count or plans after the outing.

- ManBan: Returned to the mound last night after missing some time with elbow stiffness.  Threw 2 scoreless innings for Double-A Trenton.