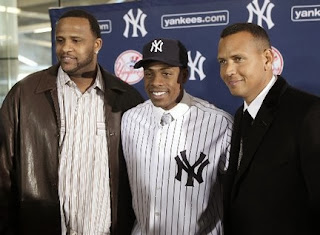 (Remember this?  Courtesy of the AP)

The Mets finalized their 4-year/$60 million deal with Curtis Granderson yesterday, making his move across town official and ending a 4-year run in pinstripes that was interesting to say the least.  Granderson went from underperforming trade bust who had to be benched to rebuild his swing in his first season to one of the premiere power hitters in baseball from 2011-2012 to an unlucky injury case in a contract year this past season.  He finished his short Yankee career with a .245/.335/.495 slash line, 115 HR, 345 R scored, 307 RBI, 2 All Star Game selections, and 1 Silver Slugger award in '11.  He also leaves with no rings, joining the Yankees the year after their last title and being a part of 4 teams that failed to return to the World Series.

Yesterday marked the actual 4-year anniversary of the 3-team trade that brought C-Grand to the Yankees.  It was a trade that brought up the always pertinent "playing for the present or the future" question with respect to the Yankees' plans.  To acquire Granderson, at the time a 28-year-old All Star centerfielder, the Yankees traded away one of their top prospects in center fielder Austin Jackson, 24-year-old starting pitcher and former top prospect Ian Kennedy, and lefty bullpen arm Phil Coke.  The move was clearly made with the present in mind and now 4 years later, with no more WS trophies to show for it, it bears going back and taking a look at how things could have played out different had the trade not been made. 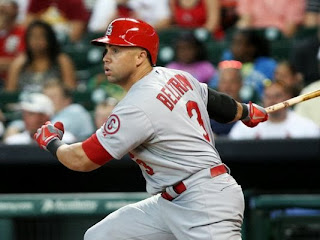 I'm sure many of us were still reeling from/coping with the announcement of the Robinson Cano-Seattle Mariners signing on Friday night when the Carlos Beltran deal was reported.  For me, that meant drinking more beers than I should have at my girlfriend's work holiday party and trying to rationalize the business side of the deal with a co-worker of hers who is a big Yankee fan.  By the time we got home, I didn't have the energy or the mental sharpness to write much more than I did on the signing.  Now that I've had a few days to think about it, I think I'm ready to analyze the deal and what Beltran will bring to the team for the next 3 seasons.

Michael Young: Do Not Want

The search for help at second base and third base is on, and according to Newsday it includes a former top trade target:

"A source with knowledge of the team's thinking said Monday that the Yankees are very much interested in Michael Young."

You might remember Young's name getting thrown around a lot during the most recent trade deadline, when the Yanks needed insurance for A-Rod at third base.  Ultimately a deal never came together between the Yanks and the Phillies and that's probably for the best.  Young has been a negative fWAR player the past 2 seasons, due in tandem to his decrease in power at the plate and massive decline in his defensive value now that he's in his late 30s and only capable of playing below-average defense at the infield corners.

Young made a lot of sense as a cheap rental player this past season.  As a full-season option at a position of need he's a way less than ideal option.  Someone like Mark Reynolds could play just as horrible a defensive third base as Young and do it while offering 30+ HR power.  He could also come at a cheaper price than Young, who still has a long and successful career history to fall back on when looking for contract offers.  Hopefully this reported level of "very much" interest in Young isn't as a Plan A for the hot corner.

Saw this tweet from Barbarisi last night and it made me stop and think.  Would a trade for Homer Bailey make sense for the Yankees?  I could see it.  He hasn't been a stud out in Cincy, but he's been pretty good the last few years (3.64 FIP, 6.2 fWAR since 2012).  He's only 27, he's arbitration-eligible this season and he probably would cost as much on a new deal after next season as someone like Garza or Jimenez would this offseason.

His HR rates could be a problem in The Stadium but his GB rate has improved over the last 3 years so there is something to work with to try to cut down on the long balls.  And Gardner does make sense as a return piece for the Reds.  They could use an outfielder with Choo gone and could use a real center fielder like Gardner, unless they're sold on Billy Hamilton as an everyday player.

The trade talks relative to the starting pitching market are just starting to pick up in Yankeeland.  I'd say this Bailey thing is worth keeping an eye on if it starts to get legs later this week.