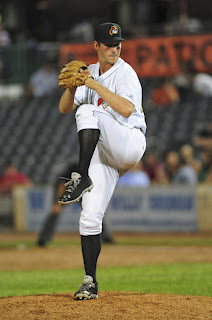 Quick Hit: Double-A Trenton Gets Raided In The Rule 5 Draft

The Yankees weren't expected to make any selections in this morning's Rule 5 draft.  With a full 40-man roster and Carlos Beltran still waiting to be added, there was no wiggle room to snag anybody.  They were expecting to lose a few of their unprotected players, however, and the rest of MLB did not disappoint there.

In all, 5 Yankee MiLers were selected this morning, 4 of them from the Double-A Trenton Thunder.  Right-handed relief pitchers Tommy Kahnle and Felipe Gonzalez, righty starter Mike O'Brien, and outfielder Ravel Santana were the Double-A casualties, along with righty reliever Kelvin Castro from High-A Tampa.

Kahnle and Santana are the biggest losses.  Both have previously been on a few top prospects list and Kahnle was the type of high-velocity bullpen arm the Yanks have become adept at drafting and developing.  Santana was a toolsy OF prospect with a potentially high ceiling a few years ago, but has had his development severely compromised by a David Adams-esque ankle injury.  It's doubtful he sticks on the Houston roster all season, but props to them for taking a low-risk shot.

The good news?  Guys like Chase Whitley, Dan Burawa, Fred Lewis, and Zach Nuding escaped and will remain with the organization.

Posted by Unknown at 9:47 AM No comments:

Brandon Phillips: Do Not Want

And apparently the Yankees don't either based on last night's reports.  The Reds offered up Phillips in a straight 1-for-1 trade proposal for Brett Gardner last night and were rejected.  While Phillips would fill an obvious need at second base, there's too much to not like about him to make the trade worthwhile.

For starters, he's owed $50 million over the next 4 years, a steep price to pay for a 32-year-old who's already showing serious signs of decline.  Phillips' greatest strengths are his plus defense and his right-handed power, both of which have been trending downward for the last few seasons.  His ISO has been in a pretty steady decline going back to 2007 (.197 then to .135 in 2013).  He doesn't take walks, he doesn't get on base, his speed on the basepaths isn't what it used to be, and he has a reputation for being an asshole.

That's a lot of baggage to take on for a guy who was below-average offensively this past season.  And don't talk to me about the 103 RBI because I'm not going to listen.  Acquiring Phillips based on his name recognition and past performance (like Michael Young) would have been a classic Yankee move, and probably something they would have done a few offseasons ago.  It's good to see they aren't interested in heading down that path again, even if the no-trade clause helped make that decision easier.  The Yankees need a starting second baseman badly, but Phillips isn't the answer.
Posted by Unknown at 7:43 AM No comments: