Cano Locks Right Back In

June was a pretty mediocre month for Robinson Cano by his standards (.275/.395/.418, .345 wOBA).  The elevated BB rate was nice, but the low average and lack of power were crippling in the middle of the batting order when almost everybody else around him was regressing at the speed of sound.  And Robbie started to hear about it from the fans.  The calls for the Yankees to not re-sign him, foolish as they may be, became greater and the whispers about trading him at the deadline grew louder.

Cano has predictably turned things around quickly in the last handful of days.  He's 12-21 in his last 5 games with 4 HR, 8 RBI, 8 R, 1 BB, and not a single strikeout.  The switch has been flipped and he's locked in again.  But what was the real cause of his June swoon?  The guys in the ESPN broadcast booth on Sunday night, John Kruk in particular, were convinced that Robbie was struggling due to him expanding his strike zone and trying to do too much with everybody else around him slumping.  This made little sense to me considering Robbie's BB rate in June was as high as we've ever seen it as 15.8% in 114 PA, and including intentional walks he was given 23 free passes.  You just don't walk that much as a notorious free swinger if you're expanding your strike zone, and the pitch plots from last month agree: 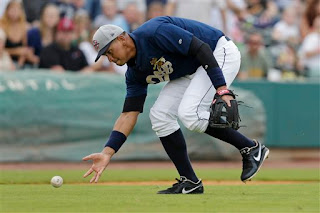 The ongoing below-replacement level saga in the Yankee infield got a boost for the near future yesterday when both Alex Rodriguez and Eduardo Nunez appeared in a MiL rehab game playing for Low-A Charleston.

For Rodriguez, it was his first rehab game of his 20-day window and he finished it without doing anything on the field to injure himself or saying anything off the field to cause a stir.  He went 0-2 at the plate with a K and a GIDP in 3 innings and a challenging day in the field on 2 bunt attempts that he came through without any reported physical issues.

For Nunez, yesterday was his third rehab game after playing 2 with High-A Tampa.  He went 2-3 yesterday and played 7 innings at short and now has 3 singles and a walk in 7 rehab PA.  He'll be eligible to come off the DL during the All Star Break, with A-Rod becoming eligible a few days later.  It's hard to think of Nunez as an upgrade, but both he and A-Rod will be welcome additions to the right side of that infield as long as they don't suffer any setbacks.

Kuroda To Miss His Next Start

As first reported by David Waldstein late last night, Hiroki Kuroda returned to New York earlier this week to have some tests run on a sore left leg issue.  An MRI revealed it to be a sore left hip flexor, nothing too serious but enough that Kuroda will be skipped when his spot comes up in the rotation again on Friday and Ivan Nova will start in his place.

Joe didn't sound overly concerned talking to the media about the injury after the game, which is good news.  It's still best to err on the side of caution with a pitcher Kuroda's age and missing 1 start isn't huge cause for concern.  I have to think the team would have put him on the 15-day DL if they felt it was necessary.  This probably explains why a move wasn't made with Nova yesterday to add a man to the bench after Nix's hamstring problem was announced.
Posted by Unknown at 9:00 AM No comments: 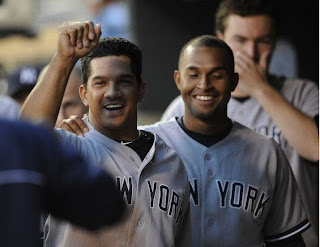 An already short and terrible bench got even shorter before last night's game when Joe announced that Jayson Nix was out with a tight hamstring and could miss a couple days.  The last thing the Yankees needed was to lose another position player, what with the amount of available reserves at a premium.  And maybe that was the reason they decided to not make a roster move to call somebody up before the game and only went with a 2-man bench.  Because that decision didn't really make a whole lot of sense to me, especially with Ivan Nova still unavailable after throwing that long relief session over the weekend.  But out they went, and win they did.

- Strong start for Phil Hughes.  He gave up a run on a Joe Mauer single in the 3rd and looked primed for the big inning in the 4th after putting runners on second and third with nobody out.  But he got 2 straight strikeouts and a groundball out to escape without any further damage.

- He got picked up by his offense in the top of the 5th as a reward.  Alberto Gonzalez came up with runners on the corners and drove them both home with a double down the right field line, and Ichiro tacked one on with an infield single to make it 3-1.

- The Yanks really opened it up in the 7th.  A David Adams 1-out double and another Gonzalez hit scored 1 run, and a few batters later Robinson Cano put the game out of reach with a 2-out, 3-run HR.

- Hughes was solid after his 4th inning Houdini act.  He gave up just 1 hit and 1 walk in his final 3 innings of work and didn't allow a runner to reach second base.  Second straight really good outing for Phil.

- Bit of a rough go for Preston Claiborne in the 9th.  He got touched up for 2 runs and had to have Mariano Rivera come clean up his mess.  Worth it to give the regulars a night off though.