In Case You Need More Proof...

... that Mariano Rivera is some kind of mystical, inhuman cyborg that destroys anything in its path and is only addicted to winning, here it is, courtesy of the World Wide Leader's "Sports Science."

Now granted this is coming from somebody who had to guess and cheat his was to Cs in the last science class he ever took, which was senior year in high school, but that's just crazy!  1600 RPM?  8 inches of lateral movement??  All from the same arm angle as his 4-seamer???  That just doesn't seem fair.  And then you factor in the whole 'human eye not being able to see a ball traveling that fast in the last 10 feet before it reaches the plate' thing and I know it's just not fair.  Maybe guys should be allowed to take HGH if they're going to be facing Mo on a regular basis.  With the hand-eye coordination benefits it has, it only seems right to help level the playing field for these poor schlubs.

I would also like to take this opportunity to start the official AB4AR campaign to change the name of the "Magnus Effect" to the "Rivera Effect."  It just seems right.
Posted by Unknown at 7:49 PM No comments:

Is The Offense Already Starting To Heat Up? 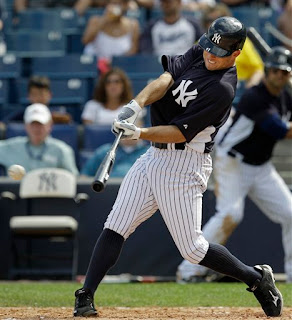 (That's a fine looking swing, Mr. Gardner.  Courtesy of The AP)
You've got Brett Gardner following through with 2 hands on his swing now and making line drive contact seemingly every game.  You've got Jeter putting multiple hits on the board and by all accounts looking better at the plate each game.  You've got The Horse looking trim, seeing the ball well, and absolutely mashing the crap out of everything right now.  You've got Cano hitting line drives, Teix looking sharper than he ever has this early, and even Russell Martin and his now 94.5738% healthy knee getting a couple of hits and stealing bases yesterday.  These are all good signs, right?

Before you roll your eyes and give me the "Spring Training doesn't mean anything" speech, notice that I didn't include anybody's stats anywhere in that previous paragraph.  I'm well aware that ST performance and statistics have little to no bearing on how a guy is going to play once the games start to count.  But it's the actions that are happening on the field that are encouraging, especially when it's geared towards the group of guys who are trying to come back from down years and injuries.

I've long held the belief that Brett Gardner could hit for a little more power if he wanted to and said that he should be looking to drive the ball into gaps.  He makes the adjustment to his swing, finishing with both hands on the bat, and suddenly there's more sting in his contact.  A-Rod gets into better shape this year, drops a few pounds to lessen the load on his older body and he's hitting the ball better than I can ever remember in ST since he joined the Yanks.  Teix put in more work in the offseason and he's off to a better spring start.

The point of this is not to try to prove that all these performances are going to lead to monster starts in April or monster years from these guys.  The point is to recognize that many Yankee hitters are having better springs than they have in the past with the bat.  They're ahead of the curve in terms of getting their timing and swing mechanics down, and that has to at least be an encouraging sign for them, their coaches, and us fans.  Think about it the other way; if Teix was still rocking on 0-for right now and popping the ball up all the time, we'd be sitting here saying "Here we go again.  Goddamn Teix is starting off cold."  So since he ISN'T doing that this spring, that should at least give us hope that he's going to carry this over in the regular season and, at the very least, not suck as badly in April as he has before.
Posted by Unknown at 12:50 PM No comments:

The Dawning Of A New Era

(No, AB4AR doesn't have hats... yet.)
If you're a regular reader of the site, you might notice a few small changes this morning.  After some input and suggestions from fellow members of the Yankosphere, I finally got around the updating the site and changing the color scheme over to the road uni to hopefully make everything easier to read.  I even added the link to the Facebook page!  Hey, techmology!

I hope this new color scheme works for everybody and I look forward to getting any feedback, positive or negative, that my readers have.  As I've said many times before, I'm a Yankee fan and a writer, not a computer programmer, design engineer, or software tech, so this is about as fancy as the design is going to get for now, at least until Google gets smart enough to buy me out and put some professionals on the job.  So while you can't count on getting a site that looks like something, you can still count on getting the same low-quality, high-comedy analysis and insight that you've come to know and hate love from AB4AR.

P.S.- Links in posts will now show up as the bold/italicized text, so click on those in the Linkapaloozas to check out the excellent work of my blogging brethren.  I'll have to make a conscious effort to stay away from that in my regular writing.

P.P.S.- Check out the damn Facebook page and "Like" it.
Posted by Unknown at 8:16 AM No comments: