Maybe this is just the homer in me talking, but I'm a little confused by the prospect news today.  First, Kevin Goldstein releases his organizational prospect rankings and places the Yankees 15th, saying:

"There is plenty to dream about in terms of young talent, but other than Banuelos and Betances, the upper levels are bereft of quick help."

First off, I think that statement, while being very accurate on the assessment of the lower levels, criminally undervalues the Yankees' Triple-A pitching depth.  They may not all have future-ace ceilings like ManBan, but every one of the group from him, Betances, Warren, Phelps, and Mitchell could be starting in other teams' rotations this year and there aren't many organizations who can say that about their entire Triple-A staff.  And while they aren't going to gather any All-Star Game votes, guys like Laird, Pena, Maxwell, and Romine are more than capable of filling in as bench players and could also have jobs on other teams were it not for the Yankees' desire to go heavy on veterans this year.  Same situation with Whelan, Pope, and Kontos in the bullpen.  So I would have to respectfully disagree with Mr. Goldstein's statement that there isn't any "help" in the upper levels of the Yankees' system.

As for Marc Hulet, he released his Top 100 Prospects list today over at Fangraphs, and the only thing I can think that makes any sense is that he just forgot to include Gary Sanchez somewhere in the top 75.  Because if he honestly believes that Sanchez is not one of the top 100 prospects in all of baseball, then the only reaction I can have is...

I mean, really? Really, dude?  Really?  Gary Sanchez is only 19 years old, and he turned 19 so recently that he's closer to being 18 than he is to being 20.  He just came off a season where he put up a .364 wOBA while being the 2nd-youngest player in his entire Low-A league.  He's got power (.229 ISO) and plate discipline (10.5% BB rate) well beyond his years, and he profiles as an elite-level power hitter from the catcher position.  Sure, he's got his issues defensively, but what pro catcher his age doesn't?  When you're looking at the type of production this kid is capable of from a premium position and remember that he's still only 19, there's no way you can reasonably leave him off of any top 100 prospects list.

If you've been an AB4AR reader from the beginning, you know it's been years since I've included non-Yankee sports posts on the site.  But the one exception to that rule is and always will be the NCAA tournament bracket.  My bracket last year was an abomination, so I'm looking to bounce back.  If you haven't had a chance to fill your bracket out yet and are looking for some direction on what to do (or what not to do if you're basing your picks off of mine), check after the jump for the official 2012 AB4AR bracket.

He was off crutches yesterday, his walking boot is scheduled to come off today, and things are looking good for Dave Robertson in terms of being able to fully recover from the bone bruise to his foot and get back into action quickly.  That being said, it would be probably be wise for the Yankees to take it easy on that foot and not have Robertson be on his feet all the time, unnecessarily walking and running around on it and risking a setback.  It's his plant/push foot so it's important that it be 100% before he gets back out on the mound, and since D-Rob has already shown to not be a master of walking down/kicking boxes down the stairs, better to proceed with caution.  And how to do that, you ask?  Simple.  Stair rails. 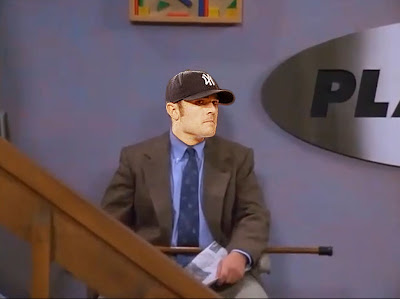 Install a few of these babies around the Tampa complex and completely eliminate stairs from the equation.  This lessens the wear and tear on that bruised foot, takes away any chance of a repeat of Robertson's previous stair gaffe, and should help get him back to 100% and on the mound quicker.  While we're at it, the Yankees should probably designate a few of the younger, bigger guys in camp responsible for carrying Robertson to and from all team activities over the next week.  And a private handicapped bathroom probably wouldn't hurt either.