Happy Birthday To The Chosen One

I know that for most people Jesus' birthday is on December 25, which is still a few weeks away.  But any good Yankee fan knows that the REAL Jesus is celebrating his 21st birthday today. 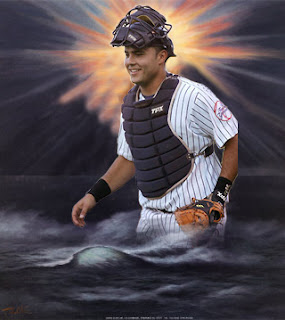 So with that in mind, AB4AR would like to wish Jesus a happy birthday and once again announce that we can't wait to see him in pinstripes next season.  Hopefully he enjoys his first night of legal drinking.  He already has a leg up on the rest of us since he can turn water into wine.  That's gotta cut down on the bar tab at the end of the night.
Posted by Unknown at 7:06 PM 1 comment:

The Grinch Who's Stealing Christmas

Casey Close, you are now public enemy number 1 in Yankeeland.  And I say that because I still believe, like any other logical Yankee fan would, that you're the one behind all these insane demands and unnecessary comments about the negotiations and not Derek Jeter.  Jeter has been a model of class since Day 1 in a Yankee uniform, so I still refuse to believe that he is honestly sitting there in his home, Minka by his side, completely flabbergasted and insulted by the Yankees initial offer and I refuse even more to believe that he would actually demand and think he is worth a 6-year, $150 million contract.

Now if Close honestly thought that the 3-year/$45 mil offer by the Yankees was baffling and a lowball deal, that's fine.  He's an agent and it's his job to get as much for his client as his possibly can.  And as much as I'd like Jeter to sign on the line for 3 and 45, I always knew in the back of my mind that the final offer was going to be more than that, probably somewhere around 4 years/ $75-80 mil.  But to publicly dismiss the Yankee offer as a slap in the face and then counter with 6 years/ $150 million is so out of the realm of basic logic and mental health that is makes me concerned for his well being.  The Yankees haven't wavered from their plan in these negotiations, and that plan falls right in line with how they have operated since Cash took full control in '08.  Close has done nothing but make the Yankees look like the good guys and he and his client, the most beloved Yankee since Thurman Munson, look like the bad guys and the greedy guys.

5 years/ 100 mil, OK, I can live with that.  It's a respectable counter offer and gets both sides closer to what would be the middle ground of 4/80.  But to take the Yankee offer and triple it for twice the years?  That's not only insulting to the Yankee management and their intelligence, but also insulting to every other player on the Yankees who was more productive than Jeter last year and will be more productive than him next year.  If Jeter is worth $25 million a year then Nick Swisher is probably worth $35-40 million and Robbie Cano is worth $50 million at least.  To quote Gob from "Arrested Development," "COME ON!!"

I'm sure Jeter has stayed out of the media in these negotiations to keep up his image as a team-first guy.  Any statement he makes regarding either of the offers makes him look like he's in it for himself and that's not what he's about, so he's in a tough spot as far as commenting on the proceedings goes.  But with the way this has gotten real ugly real fast, Jeter needs to come out and make a statement now.  The longer he waits and the longer he lets Close run him into the ground with the way he's handling the situation, the more and more it makes Jeter look like he's on board with Close and makes it look like Jeter actually wants $25 million a year for 6 years.  That kind of ignorant, arrogant greed is the type of thing associated with the A-Rods of the world and Jeter has never been one to get lumped in with guys like that.

I don't want to have to turn against Jeter and the rest of the Yankee fanbase doesn't want to either, but that's where Casey Close is taking this negotiation and Jeter needs to get off the sidelines and do/say something to get these talks back on track and get a deal done that both sides are happy with before any more mud gets slung.

And then he might want to fire Close.  Just a thought.
Posted by Unknown at 11:24 AM No comments: