Say It Ain't So, Jerry 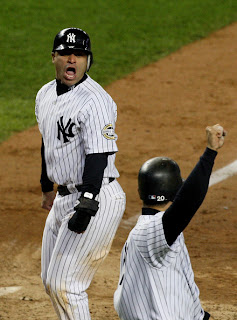 (Best Jerry Hairston moment ever.  Courtesy of Getty Images)﻿
Say it ain't so!

I don't know why, but I always had this idea that Jerry Hairston would end up back with the Yankees at some point.  Dude was here in '09, won a ring, played well, and would be a one-man bench to fill all the key spots the Yanks have.  Play a little backup third base to A-Rod, little backup first for Teix.  Play some left field or right field on days when Swish and Gardner need off.  Shit, could probably cover Jeter at short in a pinch.  And now that's all gone because the fucking Dodgers, who I thought didn't have an owner, a GM, people that cared, or even any money to spend this offseason, locked Hairston up to a 2-year deal.  I thought it was a sign when the Brewers brought him in this year.  A sign that I was meant to watch Jerry and Jerry was meant to be where I wanted to watch him.  But I guess I was wrong.  Damn.

P.S.- Ken Rosenthal breaking this story makes me hate Ken Rosenthal more than I already do.
Posted by Unknown at 4:58 PM No comments:

The Sounds Of Silence

Leading into this week's Winter Meetings, the Yankees have been relatively quiet.  This quietness on the part of the Yanks is just a small part of the overall sluggish offseason so far, but after they came out and openly declared that they were going to focus efforts on upgrading the rotation they have been very slow to follow up on the CC Sabathia deal and find the #2-type starter that they reportedly seek.

Let's remember that this is a team who, despite Cash's masterful ability to slow play the market and stir the pot to drive up deals for everybody else just by attaching his team to a particular player, has been very proactive in their attempts to follow up on recent efforts to bolster the rotation.  They were fast and decisive in locking up CC and A.J. Burnett in the '08-'09 offseason, and the same in their efforts (albeit losing ones) to bring in Cliff Lee in 2010.  They've tried to make trades for both Felix Hernandez and Zack Greinke in the last 2 years, and they took all the drama out of the CC opt-out story by squashing it and re-doing his deal this year.  When this team says they need starting pitching, they get starting pitching, which makes this recent streak of inactivity a bit surprising.  While there are pros and cons to all the available options in this year's FA class, and the cons associated with each pitcher could be enough for the Yankees to pass on all of them, there could be two other scenarios playing out in the background that are influencing the Yankees' tactical decisions this offseason.

1) Confidence In The Young Pitching

After missing out on Lee this past offseason and then scrambling to make some low-risk Bartolo Colon/Freddy Garcia moves to fill the rotation, the Yanks weren't going to risk not having a backup plan this year.  And they didn't waste any time on that plan and executed it very quickly, declaring that both A.J. and Phil Hughes would be back to join CC and Ivan Nova in the 2012 rotation and then re-signing Freddy for another 1-year deal.

These three give the Yankees the depth behind their starting 5 that they didn't have at the beginning of this past season.  With another year of experience at Triple-A under their belts, there should be no doubt that the likes of Warren and Phelps could fill in and cover the back of the rotation if needed.  And with Noesi's strong performance in the hitter-friendly DR league, he could very well be in line for a rotation spot out of camp in 2012.  The presence of these three young pitchers behind the starting 5 and the continued improvement that they've shown at each level could be lessening Cash's desire to spend money in a market of uncertainties.  And that's before we even get to The Killer B's.

2) Preference For Next Year's Class

The potential list of starters who could be available as free agents after the upcoming 2012 season includes Cole Hamels, Zack Greinke, Matt Cain, Dan Haren, John Danks, Francisco Liriano, Brandon McCarthy, Anibal Sanchez, Tim Hudson, Gavin Floyd, Shaun Marcum, Jonathan Sanchez, and James Shields.  That's a damn good list, much better than this year's.  Included in that list is 1 legit ace, 4 no-doubt #2's, and a group of guys who could be solid #2-#3's with maybe a #4 in there somewhere.  It's a much deeper, must more talented list than what the Yankees are choosing from this year, and it comes with the added benefit of many of the top guys being in their primes, similar to when the Yankees signed CC originally.

With the 2012 class shaping up to be this good and this deep, perhaps Cash and the front office are already looking ahead to then and holding back on the spending reins this year.  I know I'd feel a lot more comfortable plunking the type of dough down that C.J. Wilson is reportedly asking for (6 years/$100 million) for Cole Hamels or Zack Greinke as opposed to Wilson.  That kind of money for that number of years is a risky investment by itself, so better to spend it on a pitcher with fewer question marks and higher upside (Hamels, Greinke, Cain, Danks) than guys from this year's class with more question marks (Wilson, Buehrle, Oswalt).  Because they've already re-signed CC and Freddy to fill out a rotation, the Yankees have less of a need to take a risk on those guys this year.  They can stay patient, stay quiet, and see if a deal that's more friendly to them presents itself.  If not, they can work with what they've got and wait until the next crop becomes available in 2012.

It's been said all along that this year's FA pitching class isn't the best one in the world.  And after recent failings with A.J. Burnett and Carl Pavano, the Yankees should be looking to get the most bang for their buck from whoever they sign.  And that's not to say that Cash isn't just pulling a fast one again and is going to swoop in this week and sign somebody, but adding up all the current factors doesn't make it look that way.  Next year's potential group of pitchers should be much stronger than this year's, and with plenty of young arms in Triple-A ready to contribute and five guys in their rotation who they say they're confident in, the Yankees could be staying silent this offseason and waiting to make their noise next year.
Posted by Unknown at 9:00 AM No comments: