Thoughts On The Yankee ALDS Roster

I can't really argue or say I'm surprised with any of that.  We all know that Eduardo Nunez is a better stick and baserunner than Pena, but there was no way he was getting on based on seniority.  And I thought Nova was the better option as the other bullpen guy because of his success the first time through a lineup and the fact that Minnesota hadn't seen him, but Moseley having a bit more experience and a few instances of a job well done in long relief probably swung more in his favor and overrode the fact that he doesn't miss bats.

In any case, the lineup is set.  Thames and Berkman should see the same amount of plate appearances with Minnesota's alternating of righties and lefties.  Golson gives Joe the late-game speed option he loves, but if Swish's knee is good to go then I wouldn't use him to run for anybody except Jorge or whoever is DH'ing.  And it will be interesting to see where A.J. fits in the hierarchy of long relief with Mitre and Moseley also on board, that is if Joe decides to use him at all.
Posted by Unknown at 4:04 PM No comments:

ALDS Preview: 3 Things That Will Decide The Series 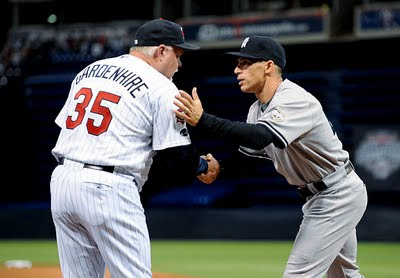 Just like last year, it's the Yankees and the Twins in the American League Division Series.  This year the roles have been reversed as the Twins have the homefield advantage and the Yankees come in as the Wild Card but still the odds-on favorite.  The Yankees were 4-2 against the Twins in the regular season, taking 2 out of 3 at The Stadium and 2 out of 3 at Target Field behind 4 good pitching performances in the wins and 2 shitty ones in the losses.  Almost all of the same faces from those series will be present here, along with some new ones (Matt Capps and Brian Fuentes for the Twins.  Kearns, Berkman, and Kerry Wood for the Yanks).  Here are the 3 keys to winning the series, and no, none of them have anything to do with intangibles or the scrappiness of Nick Punto.

The book on the Twins is that they struggle against lefties because of their lefty-heavy lineup.  The only significant right-handed bat in their lineup is Delmon Young, with maybe Michael Cuddyer getting half a vote.  Because of that, the Yankees are going to load up on their lefties and give CC and Andy 4 of the 5 starts in the series and try to neutralize the Joe Mauers, Jim Thomes, and Jason Kubels of the world, something Andy has already done twice this year.

The Yankees are also traditionally known as a team that struggles against lefties, although they succeeded in disproving that theory for most of the regular season.  The Yankees are better equipped to face lefty pitching as they possess more switch hitters than the Twins and the option of subbing Marcus Thames in for Lance Berkman, and that will come in handy as the Twins also plan to use 2 lefties in their rotation, albeit 2 lefties against whom the Yankees have had success, Liriano and Duensing.

In looking at each team's performance against LHP this year, the stats break down like this:

The numbers show both teams hitting lefties at about the same clip, with the Yankees doing more with their hits and drawing more walks, a testament to both the danger their lineup presents and their traditional patience at the plate.  Also worth noting is the fact that Minnesota's left-handed batters all have OPS numbers against LHP below their seasonal OPS values (for example, Thomes: 1.039 on the season, .769 vs. lefties).  The Yankees, however, have 5 regulars who posted OPS' above .833 for the year against lefties, including Robinson Cano.  Only Curtis Granderson and Brett Gardner have low values against lefties, and Gardner's OPS of .725 is still higher than that of Joe Mauer (.711).

With both teams employing 2 lefties in their rotations and featuring solid specialists out of the bullpen (Boone Logan for the Yanks, and the reborn Brian Fuentes for Minnesota), how they choose to build their lineups against those pitchers and how those lineups perform will be a big factor in determining victory.  The Yankees' ability to match up well with lefties due to their lineup flexibility and the Twins' lack of significant bench options (as discussed yesterday) should give New York the advantage here.

2) Production From The Leadoff Spot

Something that may not stand out as being overly important in the regular season can make all the difference in a postseason series where every run matters, especially in close games.  Getting the leadoff runner on changes the whole complexion of an inning.  It gives the team batting a multitude of options to try to move the runner over and set themselves up for a big inning and it changes the pitcher's entire approach against the next hitter.  It also can take the pitcher's focus off the batter a bit and lead to poor pitches, which the Yankee lineup is more than equipped to make opposing hurlers pay for.

Once again for the sake of comparison, here is how the Yankees and Twins stacked up from the leadoff spot:

The numbers show the Yankees having a clear advantage in this department, which may come as a bit of a surprise considering how much discussion there was about Jeter needing to be removed from the leadoff role because of his down year.  But Jeter has come around over the last few weeks of the regular season after sitting down with the God of Hitting, Kevin Long.  He hasn't been reaching at pitches as much and is seeing more pitches in his at-bats, something you want a leadoff hitter to do.  With another guy who sees a lot of pitches hitting behind him in Nick Swisher, the Yankees are set up well to take advantage should Jeter get on base.

For all the talk about how bad Jeter was this year, his leadoff counterpart, Denard Span, had numbers below Jeter's across the board.  Span's BA, OBP, SLG, hits, walks, and runs scored are all below Jeter's totals in just 34 fewer at-bats.  Without Justin Morneau in the lineup, the Twins are going to have to get runs however they can, and it all starts with Span getting on base.  His speed makes him a danger to steal bases or to hit-and-run.  The more he can work his way on, especially against the Yankee starters, the better of Minnesota is going to be.  Keeping Span off the bases should be a high priority for the Yankees, if for no other reason than to limit the chances he has to run on the noodle-armed combo of Posada and Cervelli.

3) Hitting With Runners In Scoring Position

Always one of the most important facets of the game and one that will almost always show a direct correlation between succeeding at this and winning ball games.  As with all other situational statistics, this one becomes even more valuable in the playoffs.  Here's how the Yanks and Twins compare:

The Twins have hit much better in this situation this year than the Yankees, but have less to show for it.  The Yankees have generated 25 more runs in just 48 more at-bats despite hitting almost 30 points lower than Minnesota.  It's not too hard to figure out that this is due to the Yankees' team power, but the walks also shed some light on why the Yanks have score more runs with RISP.  The fact that they have taken 48 more walks than the Twins shows the benefits of the Yankees' patience.  Even if they don't drive in a run with the walk, they are still creating another situation for the next batter with RISP.  If pitchers try to get cute and pitch around the A-Rods and Mark Teixeiras of the world, the Yankees have shown the ability this season to remain patient, not chase pitches, and pass the baton on to the next guy in line to come through in the clutch.  In a sense the Yankees force the opposing pitcher to throw strikes and then they make the most of the pitches they get to hit.

You can bet that Joe and Ron Gardenhire have already checked the stat books on which guys thrive in the RISP situation and which guys falter.  Here are the best and worst 2 out of the guys we know are going to play for both teams:

In addition to their top guys, the Yankees also have 3 guys with OPS w/ RISP above .839 (Berkman, A-Rod, and Swish) and 2 guys with OPS at .788 (C-Grand and Jeter).  The Twins have nobody else with an OPS value above .800 after Mauer and Young.  Surprisingly enough, for all the damage he's done in limited at-bats this season, Marcus Thames is only hitting .214/.266/.393 with RISP this year.

An interesting sidebar to the RISP topic is the combination of double plays grounded into and runners left on base, 2 categories that each team was high in this season.  The Twins actually led the American League this year with 158 GIDP.  The Yankees had 124, although it seemed like 100-110 of those came in the last 6 weeks of the season.  On the other side, the Yankees were 2nd in the AL with 1228 runners LOB this year to the Twins' 1156.  The high LOB count points back to the Yanks' low BA with RISP so it will be interesting to see how each of those stats plays out over the series as neither is a sign of success with RISP and a double play is the ultimate rally killer.

Success with RISP can be tied back to the last topic of leadoff hitter success.  The more the leadoff hitter gets on, the more opportunities you have to create RISP situations, and with the Yankees' heart of the order, they are poised to capitalize in these situations, especially against a starting pitching staff that pitches to contact.  The Yankees got the bigger hits in clutch situations last year (see: A-Rod homer off of Nathan; Teix homer off of Mijares), but they have struggled down the stretch to generate runs, especially with men on base.

With 2 teams this closely matched, the series may come down to just one or two situations where a team needs a hit with RISP.  Whichever team can get those hits will win this series.
Posted by Unknown at 12:45 PM No comments:

"Police arrested a Yankees fan Saturday after he allegedly stabbed a fan in the neck over an argument about their baseball teams’ rivalry at a restaurant in Branford, Conn., police said.


Monte Freire, 43, of remains in critical condition after John Mayor, 45, of New Haven allegedly stabbed him with a knife at the Chowder Pot Restaurant around 10:45 p.m., according to a news release from the Branford Police Department.

“Unfortunately, witnesses were telling us the disturbances emanated from a dispute over certainly that: the Yankees and Red Sox,’’ Captain Geoffrey Morgan said in a phone interview.

Mayor is facing several charges, including assault in the first degree. In addition, he is being held on a $500,000 bond. His arraignment is set for today, pending his release from the hospital." (story via Boston.com)

Nice!!!  High five for you, John Mayor!  I'm sure that asshole deserved it because, let's face it, there really is no argument about who the better team is when it comes to the Yankees and the Red Sox.  So obviously Mayor won that argument and then punctuated his victory with a good old neck stabbing.  That's just great hustle right there.
A diehard fan like that should be rewarded.  Somebody get Hank and Hal on the phone to bail this dude out and hook him up with some field-level seats for Game 3.

It's stories like this that make me proud to be a Yankee fan.
Posted by Unknown at 9:55 AM No comments: