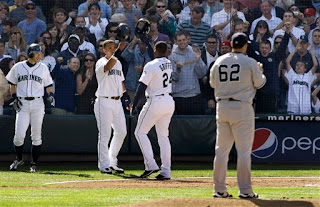 Ummmm, what the fuck is going on?  2 weeks ago the Yankees were cruising along, 9 games up on Boston, and looking like a lock to get into the playoffs and right the wrongs of the last 5 years.  After today, things are starting to look more like the last 5 underachieving seasons than the last 2-3 months of fantastic baseball the Yanks had been playing.

Pitching consistency and depth is non-existent at this point and right now the only set spot in the playoff rotation is CC Sabathia.  Hitting is feast or famine and clutch hits are harder to find lately than a good-paying job, despite all the league-leading offensive numbers the Yankees possess.  Lately we've seen more nights of the Yanks making pitchers like Ian Snell look like Bob Feller than of them working counts, piecing hits together, and making guys pay for their mistakes.  Most importantly, the bullpen has shown cracks that hadn't even been remotely apparent a few months back, cracks than they cannot afford to have moving forward with the way the rotation has been performing.

I said earlier this week that if the fight helped refocus the team then I would consider it a success.  Judging by how the team performed for the remainder of the week, I would say it did more harm than good.  If anything, it seemed to make the Yankees more complacent with the position they were, and still are in and did nothing to get their sites reset on Title # 27.

As far as Joba goes, I hate to say it but he's fucking done.  This season has gone from promising to rewarding to a disaster over the course of the summer, and while I support the move to manage his innings and won't jump on the Yankees for wanting to keep him and his arm healthy (anybody know what Mark Prior and Bill Pulsipher are up to these days?), I have to say that the way the team went about doing it was completely backwards and the new versions of the Joba Rules this year have fucked him up beyond repair.

Instead of starting him in the pen to limit his innings and then building him up to the point where he could throw 6, 7, 8 innings per start now when you need him to be in peak condition for the playoffs, the Yankees worked him in reverse and now Joba is more of a liability than an asset when he's on the mound. The Yanks need to either put him in the pen for the rest of the year and let Mitre start, or sit Joba entirely because with the way he's pitching right now he gives the team no chance to win.

"It will take more than this to get my confidence level down..." Joba said after today's horrific outing, but anybody who has watched him pitch over the last month knows his confidence has been shot for a while.  He can't locate anything consistently, can't finish hitters, and grinds the game to almost a complete stop when he gets runners on base by shaking off his catcher and constantly throwing to first base, prompting multiple trips to the mound by Jorge or Molina but of course none from Dave Eiland.

When you make a decaying, 39-year-old Ken Griffey Jr. look like Ken Griffey Jr. circa 1999, you know there are big problems.  Joba and Joe need to cut the shit with this "we still have confidence," "he looked good," "I felt good today" bullshit and just accept the fact that the plan this year didn't work and now the rotation is looking potentially just as thin for this postseason as it did the last 4.

And in case the Yankees haven't noticed, Boston is clicking on all cylinders right now and are just 5 games back, 4 in the lost column.  I'm not saying I'm hitting the panic switch yet, because the fact of the matter is the Yanks have been the better team this year and I still believe they are, but the heat has been turned up significantly and the way the Yanks respond to this mounting pressure down the stretch is going to be an indicator of their chances heading into the playoffs.

If Andy comes out and looks like a tired old man again on Wednesday, then you can think about moving that hand one minute closer to midnight.  But for now, let's all take a deep breath and just enjoy the soothing sounds of Frankie...

Posted by Unknown at 8:25 PM No comments:

I think Mark Teixeira just hit another home run...
Posted by Unknown at 12:24 AM No comments: