(Video used courtesy of NYY Stadium Insider)
Yes, that is Tim McCarver comparing the Yankee front office to Nazis during yesterday's game.  And yes, it is proof that he is still so bitter about being fired by the Yankees that he can't NOT go without trying to bash them in one way or another.

First, he took time on Tuesday during the All-Star Game to tell us all the story of the time George Steinbrenner was yelling at people in the clubhouse to turn off the volume of McCarver while he was commentating on the Subway Series.  What a way to honor George's passing, huh?  By bringing up a petty, stupid little story that McCarver has obviously held onto since it first happened.

And then there's yesterday, where McCarver spent pretty much the entire top of the 4th inning ranting and raving about how the Yankees have treated Joe Torre since he was let go.  According to McCarver, the Yankees should have already retired his number, put his plaque up in Monument Park, and renamed the Stadium "Joe Torre Stadium."  Newsflash, Tim.  Torre is still actively managing!!  He is a competitor right now.  I imagine it would be a little difficult for Joe to make travel arrangements for all these ceremonies when he's busy managing his own team.  Let's give it a few years and let Joe retire before we start bashing the organization for what they haven't yet done for him.

Anybody who thinks the Yankees aren't going to honor Joe Torre is a moron.  The guy did more for the organization over the 90s and 2000s than anybody and everybody within the higher-up levels of the Yankee brass knows that.  Surely McCarver knows this also, he just can't get over his firing before the creation of the YES Network.  He's so salty about that and the fact that he's sitting next to Joe Buck every Saturday afternoon instead of Michael Kay that he takes every opportunity he can to bash the organization.  It would almost be funny if it wasn't so pathetic.

Just relax, Tim.  Shut the fuck up and calm the fuck down and let it go.

Or keep running your mouth and risk having Hank and Hal kidnap you one night in your sleep and throw you in the gas chamber.
Posted by Unknown at 11:40 AM No comments: 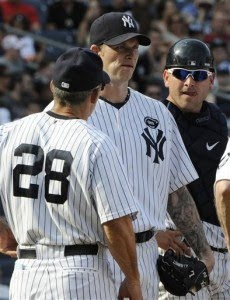