The Case For Adding A 12th Pitcher For The ALCS

After tonight, the Yankees will know where they'll be going to play Game 1 of the ALCS on Friday night.  But even without knowing who they'll face, the smart decision would be to alter the roster and add another pitcher in place of an unnecessary bench body.  Consider:

- The new ALCS game schedule for this year: play October 15th, 16th, off 17th, play 18th, 19th, 20th, off 21st, play 22nd, 23rd, while still providing enough rest for the regular position players, lessens recovery time for bullpen arms, especially with the 3 consecutive days in the middle of the series.  Joe won't have the luxury of going to D-Rob, Wood, and Logan 3 days in a row depending on pitch count.

- The Yankees played 10 1-run games against the Rays and Rangers combined this year in the regular season and 4 extra-inning games.  Combine close games, the potential for extra innings, and fewer off-days to recover for pitchers, and extra arms in the bullpen become more valuable to have.

- At some point, A.J. is going to be starting a game in this series, and his unpredictability makes him a huge risk.  Joe will likely have a quick hook on him if he blows up, so that's more innings that fall on the shoulders of the bullpen.

And when you consider that Joe didn't give a single at-bat to anybody on the bench in the ALDS, carrying 5 bodies just doesn't make a lot of sense for a longer series.  Thames is obviously staying since he and Berkman form the 2-headed DH monster, Cervelli is staying because you have to have a backup catcher, Ramiro Pena makes sense to have as an infield insurance policy because of A-Rod's injury history, and Joe likes to have Greg Golson there for a defensive replacement for Swish in the later innings.  That makes Austin Kearns the odd man out.  Gardner and C-Grand have both proven they can hold their own against lefties, and they both player better D than Kearns, so there's really not much of a chance for him to see any time on the field other than postgame handshakes and celebrations.

But who replaces him on the roster?  The 2 most likely candidates would be Royce Ring and Ivan Nova.  Ring would give the Yankees another lefty specialist to be used in late-game matchup situations when Boone Logan is already out of the game, and with his track record of early-inning success against the Rays in his 2 outings, Nova makes the most sense as an extra arm to provide innings if needed.  Whoever the Yankees choose, should they choose somebody (and they should), adding that 12th pitcher that can be used to help the team is much more valuable than an extra bench player that we know won't be used.
Posted by Unknown at 3:57 PM No comments:

Ladies And Gentlemen, You're 4th Starter For The ALCS 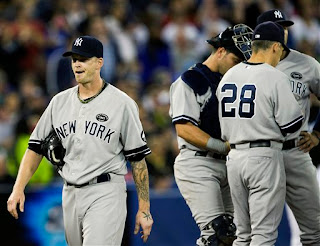 (Photo courtesy of The AP)
If ever there was a picture that inspired less confidence in A.J. from my point of view, I have yet to see it.  We'll deal with how the full ALCS rotation should line up later in the week, but knowing we have A.J. included somewhere, I think we can all agree that winning 2 of the first 3 games is a must.
Posted by Unknown at 11:11 AM No comments: