The Yankees announced today that they plan to tender contracts to all 6 of their arbitration-eligible players: Brett Gardner, Phil Hughes, Joba Chamberlain, Boone Logan, Russell Martin, and Dave Robertson.

Wait, so the Yankees actually wanted to bring back their starting catcher, starting leftfielder, setup man, LOOGY, late-inning bullpen guy, and 1/5th of their current starting rotation, all guys who are under the age of 29, come at team-friendly prices, and produce at above-average, sometimes All Star-caliber levels?  NO FUCKING WAY!!  That's madness.

Posted by Unknown at 7:31 PM No comments:

Do You Want Yu? 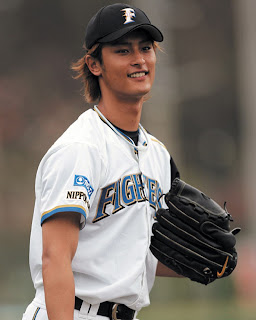 That's probably the question the top Yankee officials have been asking themselves since late last week.  The reports of the Yankees' involvement in the Yu Darvish sweepstakes had quieted down some during the Winter Meetings, and since the Meetings ended and the Darvish posting was officially announced late last week the talks have gotten even quieter.  So with a little over 2 days until the posting period ends, the biggest question right now is whether or not the Yankees are going to make a serious offer for Darvish.

On the one hand they've got what essentially adds up to a rookie or 2nd-year pitcher age-wise (25) who already has plenty of experience against the top level of competition available to him and plenty of innings built up on his young arm.  He's got an array of above-average pitches that he commands very well, a mastery of his delivery and mechanics well beyond what many current Major Leaguers possess, and is currently the top free agent option available to help the Yankees accomplish Cash's stated offseason goal of improving the starting rotation.  On the other they've got the big commitment in terms of money (likely somewhere at or over $100 million between the posting fee and contract) and years that it will take to get this pitcher, the uncertainty of how the transition will go to the Majors, and a seemingly serious goal of the team to cut payroll to get under $189 million by 2014.

So what's more important?  Curtailing the spending to start getting the payroll closer to that $189 million line and go with the current rotation (CC, Nova, A.J., Phil, Freddy, Noesi) or be aggressive on a pitcher with the potential to be a #1-#2-type?  Right now the Yankees seem to be leaning towards passing on Darvish, and they've been very guarded in their comments on him over the last 4-5 days.  We'll have to pay close attention to what's said over the next 2 to see if they tip their hand at all.
Posted by Unknown at 7:36 AM No comments: