Johnny Damon? No Thanks

As part of the MLB-wide reaction to the Curtis Granderson injury, Johnny Damon's name popped up yesterday as a possible cheap stopgap option.  Damon himself spoke at length about his desire to return to the Yankees and his willingness to work around their needs as a temporary player:

“You guys know that I would have tons of interest to go to New York.  But I just don’t think they would be interested.  They have had plenty of opportunities and I kept raising my hand, wanting to go back and, you know, hopefully it would be a perfect fit. It always had been. Have me for six weeks and then send me off on my merry way. That’s fine.”

Damon's interest in returning to New York has been a yearly offseason topic of discussion for him, but as he said, the feeling hasn't been mutual from the Yankees' side.  A year or two ago he would have made sense as a 4th outfielder, but based on his recent performance I don't think that argument still holds.  Damon hit just .222/.281/.329 (.271 wOBA) in 224 PA for Cleveland last year before being cut, with his lowest BB rate since 1996.  He's been on a rapid decline since leaving the Yankees after the '09 season, and even though he still rates positively as a defensive outfielder, it would be a stretch to say he's a better offensive option than the collection of guys already in-house who have to step up and cover for the loss of C-Grand.

So sorry, John.  You'll always have a place in Yankee history, and I know I'll never forget the double stolen base in Game 4 of the '09 World Series, but you just don't cut the mustard anymore.
Posted by Unknown at 12:42 PM 1 comment: 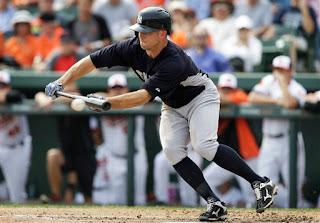