What Now For Joba? 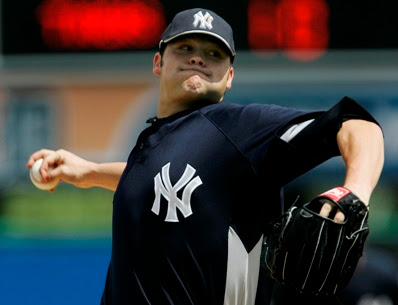 Now that the 5th starter question has been answered, the next obvious question is what becomes of Joba.  The first thought would be to put him in the bullpen where he could conceivably return to his role as Mo's setup man, the role in which he has had the most success.  But there has also been talk of possibly sending to Joba to Triple-A to stay stretched out in case he is needed in the rotation.  Brian Cashman had an interesting take on Joba yesterday.

"Yankees general manager Brian Cashman said Thursday he still considers Joba Chamberlain a starting pitcher even though the righthander will begin the season in the bullpen after being beaten out by Phil Hughes for the role of fifth starter.

"He's a starter in the bullpen," Cashman said in a telephone interview. "He can do both." (courtesy of News Day)

Huh?  No offense, Cash, but what the fuck are you talking about???  You can say whatever you want to say to try to help ease the bruises on Joba's ego.  I wouldn't expect anything less based on how the Yankees have handled him from Day 1.  But the cold, hard fact is Joba is not in the rotation and he's not a starting pitcher.  There is no such thing as a starter in the bullpen.  If you're in the bullpen, you're a reliever, period.

Since the time he rocketed up through the Yankees' system, there have been reasons/excuses for why Joba hasn't fourished as a starting pitcher.  After 2007 and in 2008 it was because he was getting re-used to pitching multiple innings and working on refining his off-speed stuff.  In 2009 it was that he wasn't attacking the strike zone and couldn't work his way through a lineup multiple times.  And in Spring Training 2010 it was that he still wasn't throwing enough strikes and now he can't replicate his delivery as he gets later into games.  Maybe I'm looking at it too simplistically, but none of those things seem to add up to making a quality starting pitcher, let alone a good or great one.

A lot of the issues Joba has had as a starter can be masked or eliminated as a reliever, and his track record coming out of the bullpen shows that.  As a reliever, Joba can rely primarily on his fastball and slider, and have more zip to both of them, so he doesn't need to worry about having a strong arsenal of 3 or 4 pitches.  As a reliever, he doesn't have to work his way through a lineup multiple times and doesn't have to think about what pitches to throw and when.  He can rock and fire and focus on his 2 strongest pitches, eliminating the possibility of throwing too many pitches for balls.  And as a reliever, Joba doesn't have to worry about replicating his delivery because he's only going to be out there for an inning or 2 at the most.  He can come out, work off of his adrenaline, and attack hitters with his best stuff without having to stop and focus on what he may have to do against a guy later on in the game.

Some people say that a pitcher's mentality has nothing to do with being a starter or a reliever, but I don't agree with that.  All you have to do is watch a game that Joba starts versus a game that Joba relieves in to see the difference.  The look on his face is different, his body language is different, the pace that he works at on the mound is different.  Everything about how Joba carries himself on the mound as a reliever projects  confidence whereas the way he carries himself as a starter suggests someone not quite comfortable and sure of himself in that role.

Long story short, Joba should be in the bullpen this year and for the rest of his career to come.  The experiment to make him a starter should be over.  The same logic that applies to Hughes belonging in the rotation to start the year also applies to Joba.  If he's going to be working out of the bullpen, where his skill set can be best utilized, Joba is undoubtedly one of the 12 best pitchers on the team.  And there is no point in sending him down to Triple-A to work on starting if it involves bringing up another pitcher in his place who is not better than him.

Nobody knows how long Mo is going to continue to pitch for, but the tandem of Joba and Mo in the 8th and 9th innings has the potential to be the most devestating in baseball, and the Yankees and Joba would be well served to keep them together in those roles and focus on grooming Joba to be Mo's successor rather than be the next ace of the rotation.
Posted by Unknown at 1:47 PM No comments: