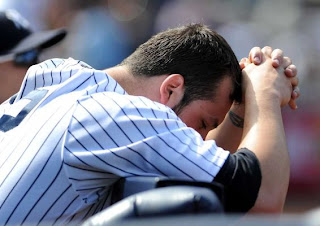 After words like "career-threatening" and "life-threatening" were thrown around yesterday when talking about Joba's ankle injury, this bit of news from Sweeny Murti is a relief today:

"Joba could be released from hospital today. He told Cashman that dr said he could step on a mound by July. But MRI results not back yet."

Using my vast amount of medical knowledge that I accumulated as a business major at UConn, I imagine the results of the MRI and other tests from yesterday will have to be known to confirm whether or not the possibility of Joba returning to the mound in July is real.  But I also imagine that his doctor wouldn't say things like that to Joba to give him false hope, so the early returns on the surgery and tests must be positive.  Ankle injuries are serious in the baseball world, just ask David Adams and Ravel Santana, and Joba's certainly sounded like it was far more severe than the injuries those two suffered.  If there's any chance he can make it back on a mound this year, that's a good thing.

Posted by Unknown at 9:51 AM No comments: