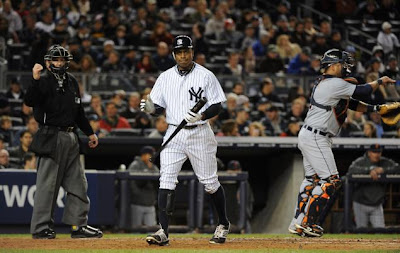 Unfortunately the season didn't play out that way, as Granderson's numbers across the board took a big hit from their 2011 levels and dropped down to, and in some cases below, the levels from his disappointing 2010.  At the forefront of this regression was a jump in C-Grand's strikeouts, which reached a career worst and Yankee all-time record in 2012, and hastened his transition from a well-rounded offensive threat to an extreme Three True Outcomes hitter.
Read more »
Posted by Unknown at 4:03 PM No comments:

The Yankees are still very much in the market for some right-handed pop to balance out their lineup and strengthen their bench, but according to Joel Sherman that interest does not include former Tiger, recent Yankee killer, and all-around dick Delmon Young.  Young is just 27 years old, has put his power on display against the Yankees many a time before, and in the "beggars can't be choosers" mode the Yanks are in this offseason according to Cash seems like an ideal matchup at first glance.  A quick look just a level or 2 deeper, however, shows a match that isn't made anywhere near heaven.