How Wrong Was I About Bartolo Colon? 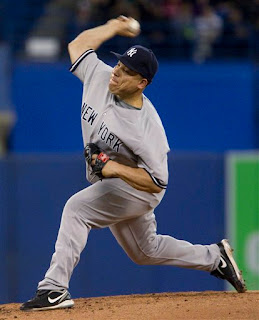 "Fat guy with a nasty sinker..." Courtesy of the AP)
Thinking back to when the signing happened, the general consensus around the blogosphere was that Bartolo Colon would be a longshot to make the team at best.  And while I acknowledged that he was a low-risk/high-reward signing because of the deal and anything positive the Yankees got from him would be gravy, I did take time to point out how little I actually expected from Colon in my "Back of the Rotation" rant in February.

"Yeah, Joe.  I knew that guy too.  And that was 6 years, 40 pounds, and a dozen-ish injuries ago.  The 2011 Bartolo Colon doesn't even look like he could make it up a flight of stairs without stopping for oxygen and a 5-Dollar Footlong halfway up." (on Joe's comment that the Bartolo Colon he remembered was a good pitcher)

I'll admit I was a bit harsh on him there, but at the same time I wasn't inaccurate with what I was saying.  Colon did, and still does, look like a hot mess sundae physically.  So that part isn't too bad.

"Look at the guy's damn boobs!  Look at them!  I don't know whether to throw up or just crop out the face part of the picture and rub one out.  Bartolo Colon is flat out DONE.  D-U-N.  He's a low-risk, high-reward option for the rotation... but that doesn't mean he should get the nod over younger, healthier, more in shape pitchers who will almost assuredly give the Yankees more innings than he will." (my take on Colon getting a rotation competition spot over some of the younger guys)

OOF and DA for me on that one.  His previous 2 outings were a sign that he still had something in the tank, and last night's sterling performance validates it.  It's a fact, Bartolo Colon can still get it done on the mound.  He isn't going to win any Mr. America competitions, but the guy still has good stuff and still knows how to use it.  He put on a clinic last night before he tired in the 7th.  His fastball had great life and continued to maintain (and even increase) its velocity later into the game, he located it perfectly, kept the ball down in the zone, and basically overmatched a legitimately good Major League lineup.  Colon did what A.J. Burnett and Phil Hughes have not been able to do consistently this year in give the Yankees some length in an outing, attack hitters, throw strikes, and generate swings and misses.  And now he has to be considered a staple of this rotation moving forward, at least until he shows he is incapable of carrying the workload.

I brought the question to the table last night on The Book, and while I will say that it is still a bit too early for me to start cooking a big plate of crow for myself, I have to admit that I was wrong about Bartolo.  He has been impressive and deserves to hold a spot in the rotation for as long as he can.  There's no way to predict how much more he'll give the Yankees going forward, but even with what he's already done I think we can call this signing by Cash a success.
Posted by Unknown at 12:40 PM No comments: