Red Sox Sign Aceves, I Die A Little Inside

Per this, Alfredo Aceves is now officially a pahht of Fraud Sawx Nation.  And that is just not good news.  I've been a staunch supporter/defender of Cash throughout this offseason, but I can't help but feel like he blew this one.

Yes, Ace currently has far from a clean bill of health, but all he's done since the time he joined the Yankees was pitch well, by any measurement.  And in a season where the Yankees were going to end up with back-of-the-rotation problems any way you cut it, it would have been worth the guaranteed money to bring Ace back into the fold and give him time to heal, knowing you could afford to let him get back to 100% at Triple-A while you weathered the early-season storm.  Maybe it's just me, but I would have felt more comfortable giving Aceves a guaranteed 900 thou than giving Colon his 900 thou Minor League deal.

I don't know, I guess maybe I had this crazy dream where Ace progresses ahead of schedule in his rehab and is good to go by the All-Star break.  He rejoins the team before the trade deadline and helps solidify the back of the rotation by becoming a rebirth of 1996 Mariano Rivera (minus all the Ks), chewing up multiple innings at a time and basically becoming a 1-man bullpen on the Mitre-Nova days.  Fans would fall in love with him, something similar to 2007 Joba, and he would begin to ride in from the bullpen on his motorcycle (being careful not to dump it and break his collarbone again).  Energized, the Yankees would come back and win the Wild Card, the ALCS, and the World Series, with Aceves pitching 3 shutout innings of relief in Game 7 at The Stadium, picking up the 6-5 Yankee win in the 15th inning.

Was that a little to dramatic?  Should I pump the breaks on the old dreammaker?  OK, I guess that's fair.  It would have been nice to have Ace back this year, and I think it's a bad move that the Yankees didn't do it, but now that he's pahht of the Sawx I hope he gets in a nasty bike accident on his first day in Boston and breaks both his arms, leaving him out for the entire 2011 season and putting his career in jeopardy. 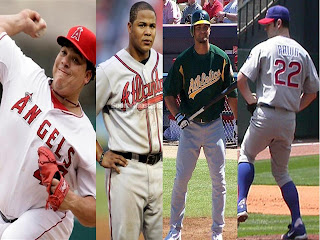 I'm not feeling particularly creative, clever, or motivated today, so I'll direct everyone to something much more interesting than whatever I might try to force in a failed attempt at sharp wit or solid analysis.

SJK from NoMaas interviewed John Manuel from Baseball America and there's all kinds of good stuff in there about Yankee prospects at all levels.  If you're a sucker for prospect info like I am then this should be right up your alley.

P.S.- absolutely nothing firing in the old brain today and I still come through for my readers and Yankee fans.  Dustin Pedroia has NOTHING on me in the "heart and determination" department.