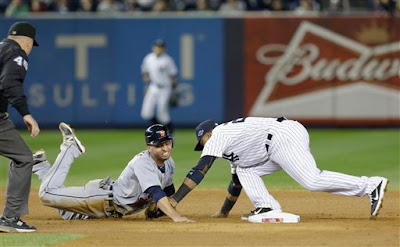 Jeff Nelson had the BEST angle to make that call and he straight up blew it.  Dude even admitted it.  Would it have made a difference in the end?  Impossible to say but probably not with the way this team is hitting.  But that was an unforgivable fuck up by Nelson and just another example of MLB looking like a bunch of assholes for not having a better replay process already in place.
Posted by Unknown at 7:55 PM No comments:

2012 ALCS Game 2 Preview: Falling Away From Them

After the jubilation of Friday night's victory in Game 5 of the ALDS, the Yankees didn't have much time to celebrate.  They had to shift their focus to the Detroit Tigers, their opponent for the ALCS, and start working out some of their offensive kinks if they wanted to have a chance at winning this series.  Andy Pettitte took the ball last night and pitched pretty well, but another double dose of offensive futility and some absolutely abysmal bullpen management by Joe combined to waste Andy's start and put the team in a 4-0 hole heading into the 9th inning.  Some A+ drama sparked by 2 2-run homers off the bats of Ichiro and Raul Ibanez (who else?) tied the game, but only really delayed the inevitable as the Yanks ended up losing 6-4 in extras and losing even bigger when Derek Jeter broke his left ankle.  There's a lot to recover from heading into tonight's game, but the Yankees have to make the recovery and have to wake the fuck up offensively.  Going down 2-0 heading into Detroit would make this series damn near over already.

Why Does This Sh*t Always Happen When I Go To Weddings?

Seriously, that's not even meant to be a humorous question.  There have been four instances this year where I've had to take days off from the blog for wedding-related activities, and every single time something out of the ordinary happened.

My one buddy's bachelor party on April 21st was the amazing 15-9 comeback win against the Fraud Sawx, and his wedding on June 2nd was the 4-3 loss to the Tigers when Joe and Kevin Long got run by Bob Davidson.   My other buddy's bachelor party on September 22nd was the crazy 14-inning win against Oakland that started the almost month-long Raul Ibanez Clutch Hit Party, and his wedding last night was Game 1 of the ALCS, where the Yanks showed nothing on offense again only to make a dramatic 4-run comeback in the 9th to tie the game only to lose in extras.  Oh, and Derek Jeter, the most consistent player in the lineup right now, broke his ankle and is out for the rest of the year.

Maybe I should just start being a huge dick to everybody so I don't get invited to any more weddings.  I always end up missing out on great games and great blogging material.  Game 2 preview coming up shortly...

Posted by Unknown at 1:24 PM No comments: