We got live baseball today, people, and that makes it a good day.  I don't know about everybody else, but I know I've mentally checked out for the week and I'm ready to drink some beer.  Onto the links!

- On Monday, William Juliano of The Captain's Blog (who also happens to be a TYA colleague of mine) argued the case for the Yankees extending the contracts of Robbie Cano and C-Grand now rather than waiting until they hit free agency.  William's argument makes perfect sense for the Yankees from both a baseball and business perspective.

- Brien Jackson of IIATMS joined the party and took his first stab at ranking the Yankee prospects, unveiling his top 30 on Monday.  I have to say, it's a very good list.  Better than my first go at the top 30.

- As you may know by now, Andy Pettitte was at the team workout on Monday, and Chad Jennings of LoHud captured some of Andy's better answers during his session with the media.  The guy certainly sounds like he's enjoying retired life, but it's always a welcome sight to see him with the blue NY hat on.

- I know it's from last Saturday, but I can't get enough of Sensei John Kreese's "Stealth Bombers" interview series over at NoMaas, and somehow in the course of laying around in my sweatpants doing nothing all last weekend I missed this latest one with Staten Island 2B Angelo Gumbs.

- On Wednesday, el duque of It Is High... recounted his emotional mental confrontation with Buck Showalter at Orioles camp.  Except for the parts where I was reminded of how much I hate Showalter, I laughed my balls off at this.

- Greg Cohen of Sliding Into Home chimed in with his two cents on Bobby V's idiocy, and it's well worth your time to check it out if for no other reason than to laugh at the Photoshop.  Kudos on that one, Greg.

-  Mike Axisa of RAB pondered the idea of swapping Jeter and C-Grand at the top of the lineup.  He points out all the pros and cons of the move, and although I don't think it would be beneficial, it would be worth seeing in ST.

- On Thursday, Lisa Swan of Subway Squawkers gave Jason Varitek a fitting send off into retirement with some real talk about his fighting skills.

- If you ever wondered what it would be like to hear Rafael Soriano sing "Sweet Caroline," you can find out at Andrew Marchand's latest "Hangin" piece that features Soriano over at the ESPN NY Yankees blog.

- As part of TYA's Prospect Week, Michael Eder presented his breakdown of the top 10 relief prospects in the Yankee system right now.  Part I can be found right here and Part II from yesterday here.

For the jam of the day, I'm going with Foo Fighters.  I saw them once in Worcester, Mass with my college ex-girlfriend and it was one of the best shows I've ever seen.  I would have missed their rumored June 2nd concert out here in Wisconsin because I will be at a friend's wedding that day, but luckily for me the concert wasn't finalized.  Question, talking strictly 90s bands,the Foos have to have the most songs that make you go, "oh yeah, this is the Foo Fighters too.  I love this song," when you hear them, right?  If you don't think you're a Foo fan, you probably are and just don't know it.

The First Starting Lineup Of The Season

The Bombers take the field for the first time today to face some competition in the form of South Florida University.  Here's the lineup they're rolling with, courtesy of LoHud:

Let's play ball, boys.  I'm might be getting 4-8 inches of snow out here in Wisco over the next 36 hours, so at least I have this little slice of spring to keep me sane.  Only thing left to do is hit the music...

Posted by Unknown at 9:48 AM No comments:

Question Of The Day: Teix At The Improv

The Yankees' annual ST team outing was yesterday, and it involved the team going to the local Tampa improv comedy club to participate in some improv skits.  Mark Teixeira walked away with the unofficial MVP honors, which begs the question, did he win because he managed to not take any good joke opportunities and pop them up on the infield? 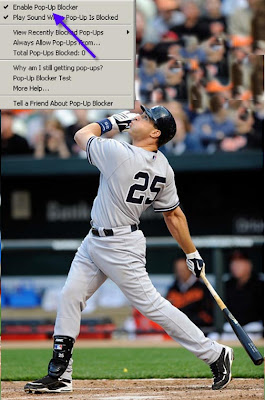 Posted by Unknown at 7:18 AM No comments: