Well it's official, gang.  Operation "Finally Get Brad's Sorry Ass to the New Yankee Stadium" is underway.  The series has been settled on (Friday 9/6 through Sunday 9/8 vs. the Sawx; couldn't do the full 4 games), the flight has been booked, and 2 of the 3 games' tickets have been purchased.  Not sure how or if I'm even going to attempt to work that weekend into the blog, but I'll try to think of something that doesn't have at least a 75% chance of me standing over a beer-soaked laptop cursing at myself.  The important thing is I'll finally get to see it, I'll never have to say I've never been again, and if I'm lucky I'll get to see Mo pitch live one more time.  Good stuff.  Now onto the links!

- On Monday, el duque of It Is High... threw in the towel on the season and started musing on some interesting seller trade possibilities.

- William Juliano of The Captain's Blog looked at the historically bad drop-off in power for this year's team, if you wanted to know just how bad it really is.

- Derek Albin of Pinstripe Pundits made a very compelling case for a player I don't think I've seen mentioned as a trade target anywhere else.

On Wednesday, Mike Axisa of RAB discussed Robinson Cano's new contract in the context of Dustin Pedroia's extension and showed how there's little to be determined there.

- Martin Riggs of NoMaas pointed out the recent struggles of the rotation and how that's not exactly helping the weak lineup's cause right now.  The starting pitching has been much better since this post.

- Alex Pugliese of Yanks Go Yard explained why it's time to start worrying about CC Sabathia.  If the big fella doesn't turn it around tonight, I might have to agree.

- On Thursday, Jesse Schindler of Pinstriped Bible asked if Travis Hafner could be down to his last days as a Yankee.  With the way he's hitting, I wouldn't mind at all if he was.

- Michael Eder of IIATMS/TYA argued that the idea of a "rebuilding year" for the Yankees is not something they'll likely consider.

- On Friday, Chad Jennings of LoHud had the latest updates and video of Derek Jeter's rehab situation.  Sounds like Saturday could be a possibility for him.

- Daniel Burch of The Greedy Pinstripes, fresh from the Yanks officially adding Soriano, looked ahead to his next trade target.

- SG of RLYW, also fresh from the Soriano addition, looked back at the move and the big picture to explain why he hates the trade.

Enjoy your weekends, everybody.
Posted by Unknown at 12:56 PM No comments:

Signs Of Life From Romine

To say Austin Romine was the surprise offensive star of the game yesterday would be more than appropriate.  He's swung the bat horribly since being called up and even after yesterday's big game his season batting line still stands at just .193/.212/.277 (.215 wOBA).  Yet there he was, getting his second start behind the plate in 3 days and going 3-4 with a pair of doubles and a run scored.  Add in his 1-3 day with another double, run scored, and RBI on Tuesday and it was a nice little series for Romine, who's quietly putting up a very good month in July in incredibly limited playing time.  He's still at just 87 total PA for the season, but a quick peak at Romine's monthly splits shows that he might be putting some things together. 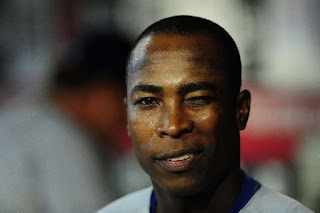 You'd think the Yankees were getting Alfonso Soriano in his prime the way it's getting covered right now.  That's how bad this offense is.  It's kinda funny actually.

The talks heated back up yesterday and Soriano was scratched from the Chicago lineup last night.  Manager Dale Sveum confirmed to the local media that a trade to New York was nearly complete, and according to Paul Sullivan, Soriano flew back to New York late last night, presumably to be in town for tonight's home game.  The hold up over the past few days was probably about money, and this morning Joel Sherman reported that the Yanks will pick up between 8-12 and the $25 million owed to Soriano.

As for the return trade piece, Buster Olney said yesterday that it was going to be a low-level pitching prospect.  There's no official confirmation of who that player is, but Sherman threw Corey Black's name out there.  Expect this deal to be announced sometime today with the missing bits of information filled in.

** UPDATE 8:32 AM- ESPN NY reporting that Soriano has officially waived his no-trade clause and the trade is official.  Cubs picking up $17.7 mil of the remaining money and the Yanks the other $6.8, $5 mil of which they will pay next year. **

** UPDATE 10:20 AM- Sherman now confirming that Corey Black will be the return trade chip.  Bit of a bummer to lose him.  He's got plus stuff and was pitching well this year.  Long-term he probably projects as a middle reliever for the Yankees though, so no major loss. **