The Only Thing That Mattered Last Night...

Just as he did on Wednesday night, Derek Jeter exuded the same patience, grit, and class that brought him all the way to Lou Gehrig's record to break it in the 3rd inning.  After taking the first 2 pitches for balls, Jeter hit a fastball down the middle right down the right field line in what has become an all too familiar sight for Yankee fans and opposing pitchers. 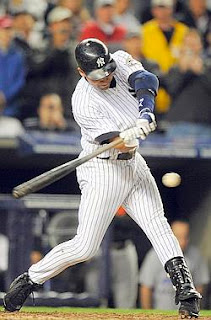 To quote Will Ferrell quoting James Lipton, "Simply stunning."
Then, in typical Jeter fashion, Derek appeared almost embarrassed as he stood on first base acknowledging the roar from the crowd, taking time to wave his helmet at all corners of the stadium and single out his family sitting in their private seats, something America's favorite athlete, Michael Jordan, almost forgot to do at his Hall of Fame induction last night. 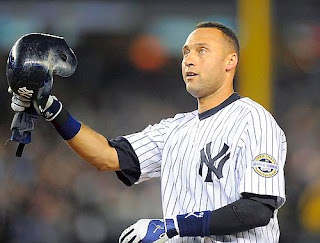 Best of all, when Jeter's teammates all came out to congratulate him, you could tell there was nothing contrived or forced about it.  Despite the bland public persona that he portrays in the media, Jeter's teammates all know what he's really like and all know the kind of guy he is.  You can't help but love playing with a guy like that, and you can't help rooting for a guy like that. 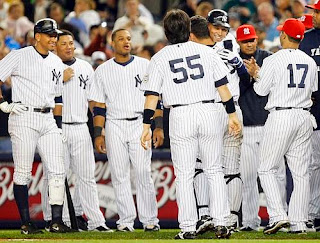 But like my parents always taught me, you gotta look at the positive side of things.  1) The Yankees didn't use any valuable pitchers out of the bullpen, 2) Joe gave all the regulars some rest after the 2nd rain delay, and both of these things add up to everybody being fresh and ready to go for the rest of the weeked.

And if that isn't enough to turn your frown upside down, just remember that the Red Sox didn't even play tonight, so they didn't gain any ground on the Yankees or Rangers (not that gaining a game on the Yanks matters at this point).

Andy looking sluggish in his second straight start was a concern, but Brian McNamee is always just a phone call away...
Posted by Unknown at 12:36 AM No comments: