Look, Joe, I still wanted to give you a little credit for sticking by your "Chris Stewart isn't CC's personal catcher" bit that you've been using on the media for the past couple weeks.  I really did.  I think it shows heart on your part to go up there every 5th night and stick to that same sad routine.

But if you're going to follow that up with something so blatantly dishonest about Eduardo Nunez being demoted to make room for Eric Chavez's return instead of Jayson Nix, that's where I draw the line.  You sent Nunez down because you want him to get more reps at SS?  Really??

Come on, Joe!  Just admit it.  We all know the truth.  Chris Stewart is CC's catcher (and also the man), and Eduardo Nunez flat out sucks at fielding and throwing the baseball.  Neither of those things are big secrets.  So cut the crap with the "more reps" routine, because the only thing those reps are going to do for Nunez is give him a greater opportunity to boot the ball all over the field and possibly set the Triple-A record for most errors by a shortstop in a season.

Just embrace the truth, Joe.  Take it all in.  It'll make you feel better.  Don't worry about Nunez's feelings.  It's not like he's going to cry.  There's no crying in baseball, remember?

Can't the Rangers just make things easy on me?  Just once this postseason?  It's bad enough that they are going to another Game 7, but it's even worse that the game isn't happening tonight but on Saturday night when I'll be out at a beer festival and presumably with no access to a television of any kind.  Luckily for me, I get to spend all afternoon standing in line at the DMV, hence the palooza making it out a little earlier than usual today.  Onto the links!

- On Monday, Donnie Collins discussed the current state of the Yankee pitching staff and how Andy Pettitte fits into it after his recent tune-up outings.

- David Roher of Deadpsin had an interesting piece in the wake of Mo's injury centered around what baseball would be like if every pitcher was Mariano Rivera.

- Vizzini of NoMaas took stock of the remaining crew in the now Mo-less bullpen and unsurprisingly concluded that it's still pretty damn good.

- On Tuesday, Mike Axisa of RAB examined Ivan Nova's problem with fastballs up in the zone and how it's affecting his performance.

- On Wednesday, Sweeny Murti of WFAN sat down for a Q&A with Michael Pineda about his injury.

- Greg Corcoran of Bronx Baseball Daily mused on current Triple-A utility man Ronnier Mustelier and how he could be a useful piece for the Yankees.  A guy who can hit the ball and play multiple positions on the bench?  I'll take it.

- William Tasker of IIATMS talked about accepting Raul Ibanez for what he does bring to the table, and being happy with how he's producing at the plate.

- Matt Imbrogno of TYA looked at all the HR Ivan Nova has allowed early in the season to see if he's missing badly or getting unlucky.  Location tells the story, and it ain't a good one.

- Mike Eder argued that Manny Banuelos should be promoted to the Major League rotation if he continues to show improved command.

- Frank Campagnola of Pinstripe Alley found some things that he liked about Phil Hughes' early starts.  Sounds like somebody wants Hughes to stay in the rotation.

- On Thursday, Steve Goldman of Pinstriped Bible attempted to ease the concerns about D-Rob after his blown save.

- Fishjam25 of Yankees Fans Unite scored an interview with Low-A Charleston masher Tyler Austin.  If he stays healthy, there's no reason to expect Austin to not be on every top 10 prospect list next year.

- On Friday, Chad Jennings of LoHud noticed what I'm noticing with Robinson Cano at the plate.  He's starting to heat up.

I'm going heavy on the Friday Jam today with some High On Fire.  I've been on a huge High On Fire kick lately.  Don't ask. 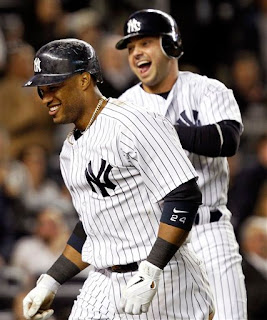