Getting ready to head to my company outing in a little while, probably won't be around until tomorrow afternoon, so here's some over/under lines for the remainder of this series.  If you were a betting man (or woman), what are ya takin' here?

- HR Allowed by Yankee Pitching Rest of Series: 4
Posted by Unknown at 10:55 AM No comments: 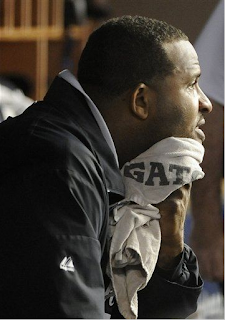 - Joe went to Joba for the 9th, and Chamberlain got burned by some bad Eduardo Nunez defense to plate a Rays' insurance run.  Fernando Rodney sat the 9th down 1-2-3 and that was your ballgame.
Read more »
Posted by Unknown at 8:43 AM No comments: