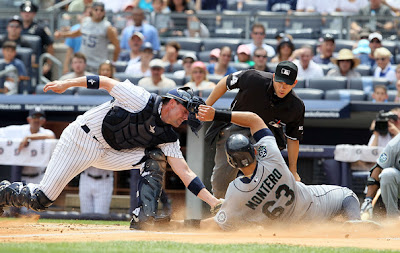 While Newman's comments on Romine might not be surprising coming from someone on the Yankee payroll, they are consistent in terms of the emphasis the organization has put on defense behind the plate in recent years.  And as Mike pointed out, that commitment to defense could have been the deciding factor in letting guys like Martin and A.J. Pierzynski go and sticking with what the Yankees have.  It's frustrating given the team's apparent willingness to take an offensive hit at the position, but if this is the path the Yanks are going to take in 2013, they at least have to be commended for staying consistent in their decision making.
Read more »
Posted by Unknown at 11:33 AM 2 comments:

Matt Diaz Is Better Than Nothing (Slightly)

He's absolutely not a full-time player anymore, and he could very well be washed up after all the thumb problems the last 3+ years.  But Diaz is the type of low risk/high reward veteran bat the Yankees have had success with in recent years.  It worked with Marcus Thames in 2010, it worked with Raul Ibanez in 2012, so why not take a chance on Diaz for 2013?  If he gives the team anything it's a good move.  If he doesn't, the Yankees cut bait and lose nothing.