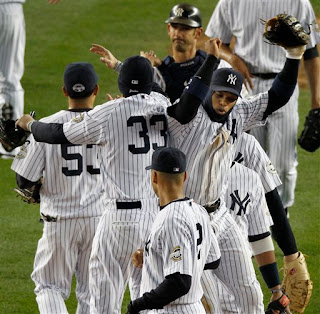 * The crowd was surprisingly loud and active early last night, considering the weather conditions and how dead silent they were in the 2 ALDS games the Stadium.  Maybe they've overcome their worries about the Yankees blowing it because they were up out of their seats cheering for CC in the top of the 1st.

* It's a good thing the crowd was behind the Yankees because to no one's surprise, Joe Buck and Tim McCarver were not.  From the first inning when Buck said that Jeter had a "bounce back year" this season (really Joe?  I didn't realize Jeter had a bad year or was hurt last year), and attempted to poo-poo Jeter's playoffs hits record by mentioning that he did it in extra games, to McCarver trying to jinx Rivera by saying he didn't look right warming up as he proceeded to sit down 3 in a row after walking the first batter of the 9th.

Also sprinkled in were references to A-Rod's steroid use, attempts to say Kendry Morales was as good as Mark Teixeira, constant mentioning of every good pitch thrown by John Lackey while completely ignoring the gem that CC pitched, and the Aflac Trivia Question being "What team, before the Angels, was the last to defeat the Yankees in consecutive playoff series'?"

Buck and McCarver, and FOX in general, did everything short of banging thunderstix and having the Rally Monkey as a guest in the booth to root for the Angels last night, and it was downright pathetic.

* While Yankees like Robinson Cano, Mark Teixeira, and Nick Swisher looked like kids getting ready to go outside and have a snowball fight in their little ear-warmer hats last night, who was the one guy not wearing anything and not even looking like the cold bothered him at all?  Derek Jeter.  Dude is just a professional in every sense of the word.  He could have his arm chopped off trying to turn two and would just shrug it off and keep playing.

* Interesting stat on Cano: he led all of MLB this season in batting average to lead off an inning.  Just one more tic to make on the "Robinson Cano is the least clutch player on the Yankees" tally sheet right there.

* While John Lackey tried to be a tough guy and go without any long sleeves last night, it was obvious the cold affected what he wanted to do on the mound, at least for the first couple innings.  He had no control over where his curveballs were going and that contributed to his high pitch count and early exit from the game.  And what the fuck is what that stupid look on his face when he's getting the signs from his catcher?  He looks like a cross between Baby Huey and constipated Elvis.

* Staying with their theme of focusing solely on the Angels, Buck commented in the top of the 5th that they really need to "get Figgins figured out" as he has been downright awful in the playoffs.  With as many bad shows as they have put out over the years, I can't be the only person who thought FOX would take that comment and turn it into a new comedy show.  'Next Tuesday at 8, it's the season premiere of "Figuring Out Figgins," starring Kevin Hart, Nia Long, and Faizon Love.  Followed by an all-new "Wanda Sykes Show."'  That sounds right up FOX's alley, doesn't it?

* While more Yankees had the goofy protective headwear on last night, they looked infinitely more comfortable playing in the cold last night than the Angels.  Anaheim looked stiff in the field and not as fast as usual on the basepaths, while the Yanks didn't look like they were playing any more different than they do in the middle of summer.  I understand they play in warm weather year-round, but if you're the Angels you have to suck it up and be professionals.  Some of those errors were unforgivable last night and probably a direct result of standing around in the cold conditions.  And that's not even counting Juan Rivera's flailing, sliding, stumbling play to cut off Matui's hit into the gap in the 5th inning.

* What the hell is with FOX's split screen pitcher-batter view with the catcher giving signs as a small square between them?  I felt like I was watching an episode of Hollywood Squares every time they did that.  Trust me, it's only a matter of time before we have a Brady Bunch-style block of cameras across the screen showing every player on every play.

* Bobby Abreu venturing near the wall in right field to catch Cano's fly ball in the 6th inning was the highest of high comedy.  It was like he expected one of the creatures from "Where the Wild Things Are" to jump out of the wall and grab him.  And 2 weeks ago without the wind blowing in, that ball is a home run easily.

* The bottom of the 6th was the perfect microcosm of the whole game.  A typical Jeter at-bat, not affected at all by the weather conditions and an atypical Torii Hunter error in center, more than likely a direct result of the weather conditions.  That right there is why the Yankees are going to win this series; the ability to block out any outside distractions and just play the game.

* This is stealing a joke from Bill Simmons, who did it in reference to J.D. Drew, but after his bases-loaded strikeout in the 7th inning, I'm thinking of making a book entitled "Hack: A Collection of Nick Swisher's Greatest Swinging Strikeouts at Curveballs Way Out of The Strikezone."  That should be a big seller, right?

* All this other shit aside, the story of the night last night was CC.  He was a manimal out there on the mound, doing exactly what the Yankees gave him 161 mil to do.  He got the first pitch strike across against more than half the batters he faced, and when he didn't, his next pitch was almost always a strike.  He had more 0-2 and 1-2 counts than I remember him having all season last night; he attacked the Angels hitters early and got ahead in the count with his fastball, which allowed him the luxury of working the outer corner of the plate with his sinker and throwing his slider sparingly as his out pitch.  He knew the weather was going to affect his off-speed stuff so he used it as little as possible and when you have great fastball command like he did last night, you're going to throw a lot of strikes.

I only remember him having one 3-ball count last night and that was the one batter he walked, so Sabathia wasn't picking corners and wasting pitches.  He was perfectly in sync with what Posada was calling and with the exception of the double by Guerrero, there weren't many hard-hit balls off him.  Last but not least, CC showed his more than just a fat guy in clown pants by fielding his position incredibly well.  His play to throw out Hunter on the bunt attempt in the top of the 6th was incredible (and was an obvious out, despite what Tim McCarver said) and he was consistently quick off the mound on ground balls to Teix to cover first.  For a man his size, CC is a fantastic athlete and he showed it last night.  It wasn't a walk-off win last night, but if anybody deserved a cream pie to the face, it was CC.  I could write an entire column just breaking down each inning last night, that's how fucking good he was.

* And I love the decision by Joe to let him throw the 8th inning.  He hadn't shown any signs of slowing down and was facing the 9-hitter in the lineup and Figgins and Abreu, who had both been awful in their first 2 at-bats of the night.  Sure they're thinking about pitching him on short rest in Game 4, but the most important game is the one you're playing NOW and Joe made damn sure he stuck with what gave him the best chance to win, CC.  If anything, this just gives Joe the option to go to the pen earlier in Game 4 if CC shows signs of laboring because they will have that much more rest.  People can talk about Mike Scioscia being a baseball genius all they want, but Joe Girardi is no slouch and so far may has done arguable the best managerial job of anybody in the playoffs.
Posted by Unknown at 9:09 AM No comments: