So the Yankees traded Brian Bruney to the Nationals today for a player to be named later. 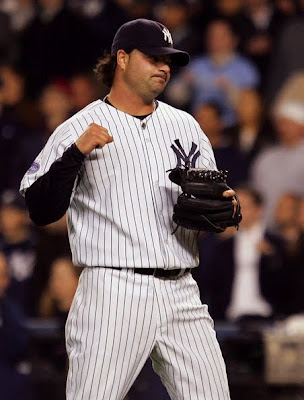 I don't know anything about this player to be named later guy; whether he's a righty, lefty, what kind of stuff he has, anything.  But I do know he has to be at least as good as Bruney was last season and if he's even a little bit better then this trade is a steal.

At this time last season, Bruney was looking to be Mariano's main setup guy for the 2009 season.  But when you have a year filled with arm problems, more questions about your conditioning and commitment, stints where you either can't get the ball even remotely close to the plate or do nothing but throw the ball right down the heart of the plate, and are resorting to childish tactics like changing your number to 99 then you would have to be a moron to think your position for next season was safe.

I'll admit, I was a Bruney fan when he first signed with the Yankees and thought his stuff would transition perfectly into an ideal setup role, but the guy just couldn't stay consistent or healthy.  And with the influx of young arms into the Yankee pen last season that proved successful and with more arms waiting in the wings, Bruney's window for opportunity slammed shut almost as quickly as it opened.

So auf wiedersehen, Brian.  It was fun while it lasted and at least you'll get a ring.  I wish you all the best in your new endeavor and hope you can help bring Washington to something closely resembling legitimacy as an MLB franchise.

And fear not, Yankee fans.  With Albaladejo and Humberto Sanchez in the system, the Yanks still have plenty of options to fill their "fat guy with questionable control and mental makeup" quote in the bullpen for 2010.
Posted by Unknown at 5:46 PM No comments:

No wrap-up today.  Too much shit to do at work.  But here's the MNF Prediction for you compulsive gamblers who are stupid enough to use my predictions as betting material.

The Pack seem to be hitting their stride at the right time.  Amazing what you can do when your offensive line actually blocks people and protects the QB, huh?  At the same time, Baltimore has stumbled and bumbled their way through the last 6 weeks and Joe Flacco just seems to be missing some of the magic that he had last year.  Couple that with the fact that Baltimore's D is not nearly as intimidating or as good as ESPN and every other NFL analyst wants you to think and Green Bay should do enough to get the win and keep themselves in the NFC Wild Card driver's seat.

MNF Predictions for the season (Winners): 9-4
Posted by Unknown at 12:51 PM No comments: