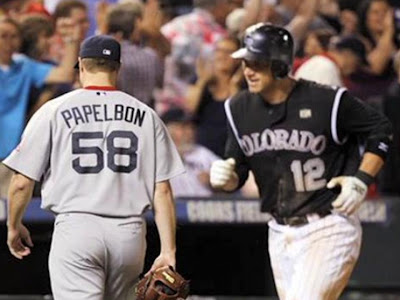 (Photo courtesy of whoever was awesome enough to take it)
I imagine the sounds coming out of Boston this morning sound something like this:

And it's just music to my ears.  I don't know what made me sleep better last night.  Watching the Yankee highlights and seeing Mo work himself out of trouble to get the team a win or following that up by watching the highlights of Papelbon give up 2 of the longest home runs in the history of baseball to cost his team a win against the best pitcher in baseball.  Seriously, does Papelbon even still rank in the top 5 of best closers in baseball anymore?  He's given up 6 home runs this year and his K/9 numbers continue to go down as his BB/9 and WHIP continues to go up.

Just for the sake of comparison, here's Papelbon's numbers compared to Mo this year:

I don't know if it was a full moon last night, or if Venus was perfectly aligned with Jupiter in the Northern sky or what, but last night was once of the strangest games for the Yankees in a while.  You have neither starting pitcher throwing particularly well (only 7 swinging strikes between the 2); you have the Yankees getting more walks (13) than hits (10) thanks to Dontrelle Willis dishing out 7 in just over 2 innings of work; you have Willis throwing just 27 of his 66 pitches for strikes; you have the Yanks somehow managing to score 6 runs in the game despite going 3-14 with RISP and grounding into 3 double plays; and to top it all off you've got Joe using Mo for 2 innings and 40 pitches to get the save, which Mo turns into an adventure by loading up the bases with nobody out in the 10th before wriggling off the hook.  Oh, and he got an at-bat in the top of the 10th.

Javy Vazquez wasn't that awful last night, just a little bit off here and there.  His pitches didn't have the sharpness that they've had in his last handful of starts and he couldn't put hitters away.  But his bullpen picked him up, especially D-Rob and Joba, who shut the door in the 7th and 8th to keep the Yankees within a run.  And there were some bright spots in the offense despite the usual suspects coming up short all game.  Brett Gardner was 2-5 with an RBI and his 24th stolen base of the year, and C-Grand went 3-5 with a 2B, a HR, and an RBI as he continues to hit the ball well since coming off the DL.

At the end of the day a win's a win's a win and the Yanks will take it.  Especially when the Jays, Rays, and Sox all took another one to the L column (more on that later).  Now it's just time to get out of Dodge before anything else strange starts happening, like Damaso Marte actually getting batters out.
Posted by Unknown at 7:41 AM No comments: