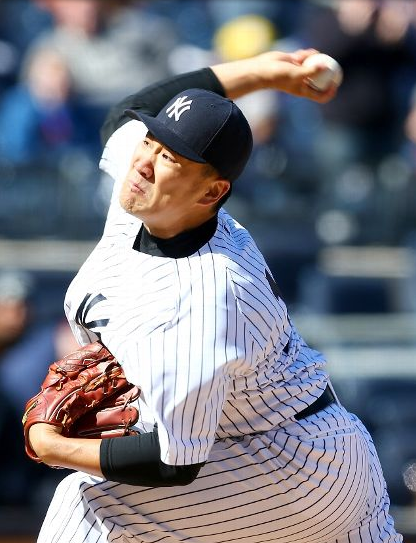 The bad weather yesterday threw a wrench into the Yankees' plans for this weekend.  But as far as this short 2-game series against the Cubs was concerned, all it did was serve to delay the inevitable.  Masahiro Tanaka made his 3rd start today, a half-day later than he was scheduled to, and he didn't show any ill effects of the delay.  In fact, he was downright supreme in his mastery of the Cub lineup.  Hmmmmm, who predicted that was going to happen?  Oh that's right!

- He didn't have to wait long for run support.  Carlos Beltran, hitting in the 2-spot again with Jeter sitting for the day game, popped a solo HR in the bottom of the 1st to give the Yanks a quick 1-0 lead.

- Tanaka immediately made that lead stand up by retiring 15 of the 16 batters he faced after the 1st.  The lone baserunner came on a bunt single in the 2nd that required a replay overturn to count.  Outside of that, he shut the Cubs down with a sick mix of sinkers, 4-seamers, and splitters.

- The lineup didn't generate much more offense against Chicago starter Jason Hammel, but they did enough.  They loaded the bases in the 4th on a pair of singles and a Solarte walk and plated a run on a Dean Anna sac fly, then scored another in the 5th on a Brett Gardner leadoff double and a pair of groundouts.

- The 1 would have been fine for Tanaka.  He allowed a leadoff single in the 7th but then finished strong with 6 straight outs through the end of the 8th, including 3 consecutive strikeouts to give him 10 on the day.

- Shawn Kelley came on in the 9th for the save and once again handled it with relative ease.  1 hit, 1 strikeout on a slider to end things, and the Yankees had the first game of the day. 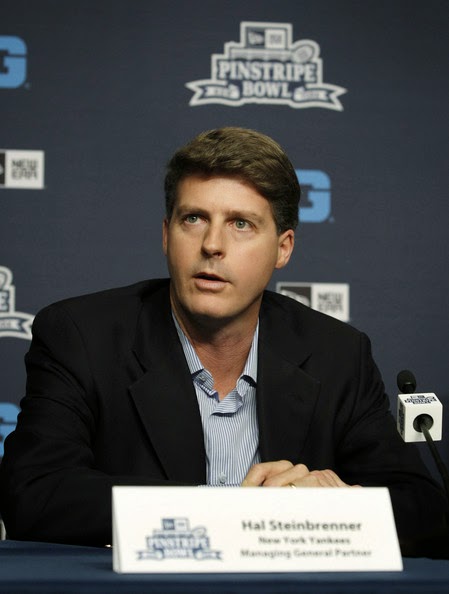 Yesterday's rainout gave everybody an extra day to process the first 13 games and form some more opinions on what this team needs right now.  Obviously the infield is the biggest area of concern, but not according to Hal Steinbrenner.  Speaking to reporters for what I believe is the first time since the regular season started, Hal shared his thoughts on the Yankees' current infield situation.  They were unanimously positive:

"I'm pretty content with our infield right now.  I think guys like Anna and Solarte have been pleasant surprises. Kelly Johnson has been good. Derek is healthy. So so far, so good. But it's early."

Nothing to really argue with there.  If I wanted to pick nits, I could say that calling Derek Jeter "healthy" when he just had to miss a few games due to a sore quad is a bit of a stretch, but I won't go there.  Hal's basically right about everybody he mentioned in that statement.  Anna and Solarte have been unexpected surprises, Johnson has been very good at the plate and better than anticipated at the corner infield spots, and Jeter has been relatively healthy and productive through 2 weeks.  But Teix is out, Cervelli is out, Brendan Ryan is out, and Brian Roberts will be out for a yet to be determined amount of time.  That should be enough injuries to put the Yankees in the market for some more infield help, right?  Wrong.

“He’s the No. 1 catcher in Triple-A.  And we had a real need where, when McCan isn’t playing, he’s going to play. … Now that we’re in a situation where when the No. 1 catcher isn’t there, the backup is obviously the starter, we’re going to take the best player.”

Pretty cut and dry, and logically 100% right.  Murphy is the guy in Triple-A now, not Romine, and so he should get called up when the Major League club needs a backup catcher.  As much as playing every day in Triple-A might help him sharpen his skills, it's not like Murphy is not going to be playing at all as McCann's backup and it's not like he's not going to learn a ton and have the same opportunity to improve his skills working with and against better players and more experienced coaches.  Bring him up, let him get regular backup reps, and start to get an idea of what kind of Major League ceiling he has.  Makes perfect sense to me.

Ernie Banks must be a happy man today.  His Cubs and the Yankees will play their 2-game series as a 1-day doubleheader after being rained out last night.  Here's what you need to know to be prepared:

- Because this game is happening with less than 48 hours notice, neither team will be able to add a 26th man to their active rosters.

- Because of the rainout yesterday, the Yanks will need another starter on Sunday in place of Tanaka.  He'll get back on his regular rest schedule thanks to the off-day next Monday.

- Derek Jeter is still scheduled to play today, although probably not in both games.  Sounds like Brian Roberts will be held out.

- Because they missed out on honoring Jackie Robinson yesterday, both teams will wear number 42 in the night game tonight.