And it's about damn time!  After the Really Good Player Game break, shit's about to get real.  The trade deadline is looming, division races are heating up, magic numbers are starting to get important, and it starts tonight against the Blue Jays.  Here's the lineup, courtesy of LoHud:

Jones gets the start at DH tonight against a lefty.  Time for him to start producing a little, which means it's time for Joe to get him a few more ABs.
Posted by Unknown at 4:23 PM No comments:

In Other Semi-Yankee Related News: Clemens Case Declared A Mistrial

"The federal judge presiding over Roger Clemens' perjury trial declared a mistrial Thursday because the prosecution revealed information that he previously deemed inadmissible." (courtesy of The NY Times)

Ouch.  Yeah, bringing back evidence that was already thrown out will get your case blown up 10 times out of 10.  I guess the prosecution MISREMEMBERED that critical step in legal proceedings.  BOOM!  Roasted.

I'll be here all week, ladies and gentlemen.

P.S.- If you think Roger Clemens didn't take steroids and didn't lie about it under oath, then you're an idiot.
Posted by Unknown at 12:13 PM No comments: 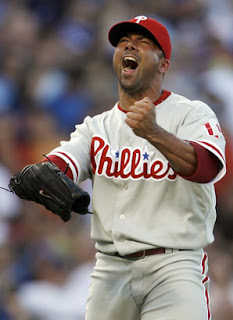 (Meh.)
The first piece of the Yankee deadline puzzle seems to be in place, as Ken Davidoff reported last night that the Bombers will be adding J.C. Romero today.  In the never-ending quest to find reliable left-handed relief pitching, this is probably the best option in terms of committing money or players to a viable arm, but still, this does more to shed light on just how crappy the Yankees' current options are than to make their bullpen better.

Those numbers become more attractive when you look at the internal lefty candidates.  Randy Flores' stats in Triple-A look decent (2.95 ERA, 3.25 FIP, 3/1 K/BB in 21.1IP), but he's scuffled lately and has never bee able to hang full time in anybody's bullpen since 2002.  And Brad Halsey, after a strong start in Double-A, has come crashing back to Earth and now sits at a 5.85 ERA, 4.46 FIP, and a Romero-esque 6.28 BB/9.  Basically, if you're the Yankees and you're going to be eating off the steamed shit section of the buffet, why not take the best looking pile (Romero)?

The biggest thing to take from this latest move, should it become official today, is that the organization still doesn't have faith in Boone Logan.  He was better in June than he was in the first 2 months, but he still does nothing to inspire confidence when he's out on the mound (see: 1st-pitch plunking of Hafner against Cleveland), and the fact is he hasn't been good at getting lefties out.  14 Ks in 13.2 IP against lefties looks nice, but 21 baserunners allowed is just not good enough, and his FIP against lefties is over a full run higher than against righties.  Any way you cut it, that sucks.

Make no mistake, a move to get Romero is definitely scraping from the bottom of the barrel.  But when that's really where the Yankees already are in terms of the left-handed relief pitching, why not take another cheap chance to improve?