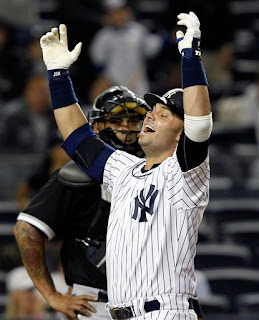 (Ahhh, the sweet smell of home runs.  Courtesy of The AP)
It wouldn't be an unfair statement if you said that the 2 worst non-Posada offensive players for the Yankees so far this season have been Nick Swisher and Brett Gardner.  Gardy lost the "vs. righty" leadoff role almost as soon as Joe gave it to him after ST and Swish's power numbers coming into last night were only slightly better than Derek Jeter's.

Last night all that changed, however, as Gardy and Swish sparked the Yankee offensive outburst in the 5th inning that effectively ended the game.  Swish went 3-4 with 3 R, 4 RBI, a walk, and his first home run of the season.  Coincidentally it was his first hit from the left side of the plate this season* (* - probably not true) and it was good to see Swish smiling again as he crossed the plate after hitting the homer in the 7th.  His numbers this year still don't like that great overall (.237/.351/.303 w/ 3 XBH), but last night was a positive sign that he could be turning it around.

Gardner continued his recent power surge that has come out of nowhere in the last week with a HR and a 2B, giving him 5 XBH, 3 of them HR, over his last 6 games.  He also drew a walk, stole a base, and scored 3 runs.  Gardner's line after last night is also nothing to write home about (.169/.229/.385), but at least he's starting to make contact and make hard contact at that.  His 21 Ks in 65 ABs is a gross number, by any standards, and these last couple of games suggest that Gardy might be getting away from his overly patient approach and starting to swing at the strikes pitchers are throwing his way.

With the way The Horse, Cano, Martin, and C-Grand have started the season, the Yankee offense has already been plenty dangerous.  If Swish and Gardy start heating up now, the lineup becomes even more so.  Last night was just one game, but it looked like a step in the right direction.
Posted by Unknown at 8:52 AM No comments: