I call Teix out for making me look bad on Thursday afternoon.  From then on, here's his line over the last 3 games:

He's raised his batting average 28 points and his OPS 107 in that time span.  Coincidence?  I think not.
Posted by Unknown at 5:38 PM No comments: 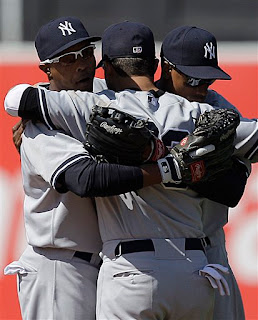 - Hiroki Kuroda threw 8 shutout innings for the second time this season.  For the first time in what seems like forever, he was able to locate his slider and sinker down in the zone.

- The Yankees got their first run in the top of the 2nd when Andruw Jones hit a first-pitch fastball for his 5th HR of the season.  He hasn't done much this year, but he's still going to crush an 86 MPH fastball over the heart of the plate.

- The other run came with 2 outs in the top of the 7th, when Curtis Granderson singled and then scored on Mark Teixeira's second double of the game.

- Kuroda put 2 runners on with 1 out in the bottom of the 7th, but got a big K and a flyout to end the threat.  This is the type of performance the Yankees were looking for when they signed him in January.

- Rafael Soriano got the save again, and once again he managed to do it without having a 1-2-3 inning.  Guess we're just going to have to live with that this season.