I'm already well on my way to a second day of too much awesome food and too much good beer and I hope everybody else is too.  It's a tradition here at AB4AR to play the most underrated Christmas song of all time and I see no reason to break that tradition this year, so I'll keep it short and sweet and wish everybody out there a Merry Christmas and a heartfelt thank you for continuing to read this little blog.  Hopefully we all get some Masahiro Tanaka as a late Christmas gift to bring some last-minute Yankee holiday cheer.  Now take it away, Mr. Garrison.

Report: Tanaka Will Be Posted 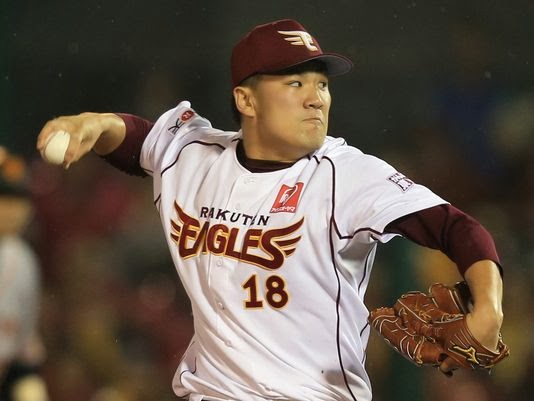 It's a Christmas miracle!  After a few months of waiting, a negotiation of new posting rules between MLB and NPB that took longer than expected, and a report last week to the contrary, the Yankees and the rest of MLB got some good news yesterday when the Rakuten Golden Eagles announced that they will in fact post Masahiro Tanaka this offseason.  I'm so late to the game that I don't even know who had the story first, but most reports said the posting could happen quickly, possibly as soon as today.

This is big news for the Yankees and the report they were hoping to get after the new posting details came out.  Their biggest current need is another top flight starter and they were hoping that Tanaka would be that.  They've shown no willingness to entertain the rest of the top MLB free agents as backup plan options, and Tanaka represents everything their rotation needs.

Whenever he is posted, I fully expect them to go in guns blazing with a big contract offer and the full $20 million posting bid.  Because of the new posting rules, Tanaka's contract will be worth more in terms of AAV, enough that it will probably push the Yankees over the luxury tax threshold.  But they can't worry about that when it comes to a pitcher with Tanaka's ceiling and I don't expect that they will.  If they're going to break through that ceiling, this is the player to do it for.

Whenever Tanaka is posted, the Yanks will have 30 days to work out a deal for him.  There will definitely be other teams in the mix, but I have to think New York is the early favorite to sign him.
Posted by Unknown at 8:19 AM No comments: