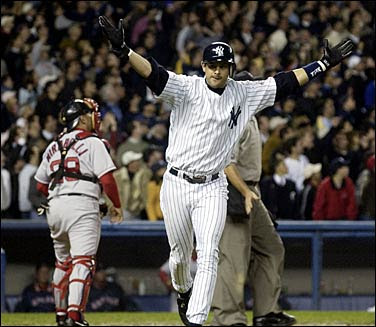 Aaron Bleepin' Boone goes straight from the dugout to the broadcast studio in a move that could finally help temper the overabundance of Red Sox dick munching and Yankee hating/ignoring at The Worldwide Leader. Or at least maybe help to even the scales out a little bit in the Yankees favor. How the ESPN execs allowed this guy to get hired knowing what their policy is on pro-Yankee talk is a baffling decision, and no doubt heads are rolling in Bristol right now, but we Yankee fans certainly appreciate and applaud this affirmative action hire by ESPN.

Boone has already firmly entrenched himself in all-time Yankee lore for The Home Run and his off-season injury that started the chain of events ultimately ending with the A-Horse donning the pinstripes. But it's good to see that even in retirement Boone is looking to continue to build his Yankee legend by entering the lion's den that is the BBTN set and mixing it up with unapologetic Red Sox homers like Tim Kurkjian and John Kruk. With Steve Phillips out, Buster Olney still firmly in the mix, and now Booney on board, the pro-Yankee contingent at ESPN is growing stronger by the day.

And even if Boone is terrible as an analyst, the fact that his presence on the set will force ESPN to mention and show clips of The Home Run way more than they would ever want to when discussing any Yankees-Red Sox series is more than enough to make him worthwhile.

So congrats, Aaron. Go out there and make us Yankee fans proud. Fight the good fight! And don't take shit from anybody, especially not Kurkjian.
Posted by Unknown at 12:59 PM No comments: