I really didn't expect the Yankees to give up Moose's number this early, which is why I didn't mention it at the time, and I didn't see Jones recognizing the significance of #18 and giving it up to Kuroda.  The fact that Jones switched to #22 for this season makes me feel a little better.  1 out of 3 will win you a batting title.
Posted by Unknown at 7:20 PM No comments: 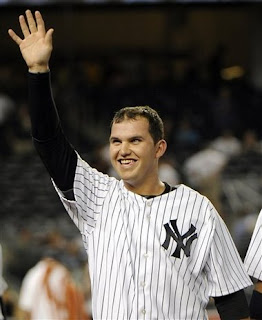 I know this isn't Joe's MO, but I liked having him come right out yesterday and address some of the questions surrounding the Yankee lineup/roster this year.  Better to hear him say this stuff now than have these topics linger and be beaten into the ground by people like me all spring.

- On the backup catcher: “I anticipate it to be Cervelli.  Obviously we’re going to give the other guys a godo look. Romine, I like the job he came up and did last year for us, especially under the circumstances… But Cervelli has done a very good job for us. His problem has been health.”

I'm no Cervelli fan, but I don't have a problem with this.  Cervelli already has more Major League innings under his belt, and he's more familiar with the bulk of the Yankees' pitching staff than Romine.  I certainly want to see Romine get a look and give the team something to think about for later in the season, but if he's healthy Cervelli should be the backup on Opening Day.

- On the 8th-inning role:  “(Dave Robertson) was our eighth-inning guy, Sori was our seventh-inning guy (last year).  It worked out really well. I don’t necessarily have any ideas of making any changes right now to it. Could you? Of course. You don’t want to say this is what’s going to be, but when I look at it, that’s kind of how I envision it.”

I know there are some people out there who would rather see D-Rob in the fireman role that made him famous, but the job he did last year can't be ignored, no matter how much Soriano is making.  Robertson was the better pitcher last year and should keep the spot he earned.  If he falters, then the topic can be brought up again, but right now there shouldn't even be a discussion.  The setup role should be D-Rob's to lose.

- On Jeter & Granderson at the top of the order: “If we were going to put it out today, that’s kind of how I envision it."

The Jeter leadoff argument would normally be at the top of the list of discussion topics relating to the lineup, but with the way he finished 2011 that should be tempered a bit this year.  Everyone knows what the L/R splits are for Jeter, and most everybody recognizes that Gardner should be leading off against righties.  But Derek Jeter is Derek Jeter and he's going to hit leadoff until he decides he doesn't want to.  It's that simple.

- On the heart of the order:  “Finishing last year, we moved Robbie up to the third spot, and I kind of envision that.  Alex following and then maybe Tex. I’m not married to that — I’m not saying that’s what it’s going to be — but it seems that we have some guys that can be really productive and that we can move around if we think it’s going to benefit us… But I envision Robbie hitting third and going from there.”

It took Joe long enough to make this change and I'm glad he's sticking to it.  This one is almost as simple as Jeter at the top; Robinson Cano is a better hitter than A-Rod and Teix.  And your better hitters should get more at-bats and more at-bats in run-producing situations.

So now that we know the answers to these questions, we can move on to other Spring Training storylines.  Thanks, Joe.

(Quotes via Chad at LoHud)