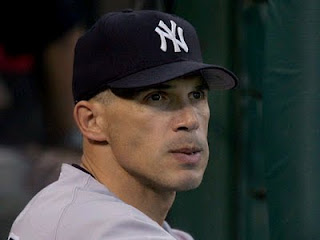 Sure, the argument can be made that the Yankees didn't deserve to win tonight's game; Andy Pettitte had nothing and it was a miracle the Angels only scored 3 runs off of him in his 6+ innings, they didn't take advantage of bad starting pitching and shaky bullpen pitching by Anaheim to put the Angels out after putting them down 3-0, Mark Teixeira has been abysmal at the plate all series, and Nick Swisher is a walking strikeout.  But the fact is Joe Girardi lost the game for the Yankees tonight, plain and fucking simple.

Bottom 7th: Joe removes Andy for Joba Chamberlain and proceeds to watch Joba get knocked all over the field as he allows the Angels to take the lead, 4-3.  I know he's a better fit in the pen than in the rotation, but Joba hasn't pitched THAT well so far in the playoffs, certainly not well enough to earn as much confidence as Joe has in him.  The smart play, if he was going to take Andy out, would have been to bring in Dave Robertson or Alfredo Aceves, but Joe has fallen in love with the bullpen rotation he has set and it bit him in the ass in this instance.

Top 8th: After a leadoff walk, Joe removes Matsui for Brett Gardner, the smart move to make down by one with your worst baserunner on at first.  But Joe doesn't give Gardner enough time to get loose or to get Kevin Jepsen's move down before sending him to steal second, effectively taking the bat out of Jorge's hands.  Gardner is thrown out on a pitch out and Jorge's following home run turns out to be a solo instead of a two-run shot that would have given the Yankees the lead.

Now I'm all for sending Gardner, that's what he's on the roster to do.  But give him a few chances to time up Jepsen and give Jorge a few chances to put the ball in play before risking an out.  Jepsen had thrown over to first once, stepped off the mound twice, and thrown only one pitch before Gardner was off and running. When you've got a lefty power hitter at the plate against an inexperienced righty who throws the ball relatively straight, it makes more sense to give your hitter a few chances to get a hit than it does to put all your faith in a cold pinch runner who hasn't had a good look at the pitcher's move and timing to the plate.  Joe tried to micro-manage and play for one run instead of letting the at-bat play out a little more and giving both his runner and hitter a better chance at setting up a steal or a hit and run or what would have been a 2-run homer, and it ends up resulting in a tie instead of a one-run lead.

Top 9th: Jerry Hairston pinch hits for Brett Gardner with 1 on and 2 out.  When your bench is relatively thin and the game looks like it's destined to go to extra innings, you have to leave yourself with more moves to make as the game gets older, and by taking Gardner out an inning after putting him in, Joe left himself with one less move to make when he needed it late.

Gardner is no power hitter, but he's good at making contact and his speed puts pressure on the defense.  It made more sense to leave him in and give him a chance to get a hit with Jorge on deck than it did to gamble on Hairston getting a big hit that gives your team the lead.  Not to mention Gardner is a better fielder and Joe should have put him in for Damon in the bottom of the 9th instead of sacrificing the DH in the bottom of the 10th, thereby leaving Joe with just Freddy Guzman as his only remaining position player.

The move to bring in Mo for Hughes in the top of the 10th and pinch hit Cervelli for Mo in the bottom of the inning weren't great moves, but they were moves that Girardi had to make after making the ones he already had.  He had left himself no choice but to pinch hit for Mo, even though he was good to go for at least another batter or 2, because he had wasted Gardner in the 9th inning and needed a defensive replacement for Damon now that Gardner was out of the game.  Again, if Joe lets Gardner hit in the 9th, he immediately replaces Damon and still leaves himself with Hairston on the bench to work with.

Bottom 11th: Joe removes Dave Robertson with 2 out and nobody on in favor of Aceves despite Robertson having good stuff, a low pitch count, and showing no signs of being hurt.

This was the worst move and was made at the worst time.  Robertson was the last short-inning guy left in the pen so it would make sense to get as much out of him as you can and then have your 2 long men for up to 3-4 innings apiece if the game played out that long.  Joe overthought the situation and elected to go with Aceves, which turned out to be the ultimate losing decision.  If Robertson finishes the inning and gets through the 12th, the Yankees are set to throw to the 19-20th inning with Aceves and Gaudin whereas the Angels are working towards using John Lackey, Game 5's starter.  Instead, Joe removes Robertson and Aceves gives up the game-winning hit.

Girardi was criticized last season for being too passive at times and appearing to almost be trying to mimic Joe Torre.  This year he shed that image and was himself and it helped get the Yankees the great results they've had.  Tonight, Joe reverted back to playing copycat and tried to be Mike Scioscia, over-thinking and over-managing the game instead of showing confidence in his players and letting them play the game the way they have all year.  Brett Gardner deserved a chance to hit and Dave Robertson more than deserved to stay in the game and get the 3rd out of the 11th inning and Joe denied them that chance.  If he's going to put them on the roster, he should let them play, period.  Stop trying to compete with other managers, Joe, and let your team do their thing.

And Joe's botched decisions didn't just affect tonight's game.  Since it's already known that CC is pitching tomorrow on short rest, if he doesn't have it and the Yanks lose again, Joe will be questioned for that decision AAAAAAAAAAAAAAAAAAAAND all these managerial errors from tonight become even more glaring when the Angels even the series.  Joe breathed life back into the Angels' playoff lungs tonight and he better be saying his prayers that CC is on his game tomorrow.
Posted by Unknown at 9:27 PM No comments:

Daunte Culpepper is officially done as a football player. Drew Stanton showed why he's a 3rd-string quarterback. Packers got exactly what they needed coming off a bye week.

Maurice Jones-Drew backed up his calling out of the team and coach with 133 yards and 3 TDs, and Mike Sims-Walker managed to not bang any random chicks after team curfew.

Favre almost got the Aaron Rodgers treatment as the Vikes' D imploded in the 4th quarter. In true Ray Lewis fashion, Ray started dancing maniacally on the field after Hauschka's miss and couldn't be stopped for 5 minutes to be informed that the Ravens had actually lost.

Here's a recipe for a guaranteed loss: dynamic offense coming off a bye week against an overrated, banged up defense that has grown complacent by beating up on shitty teams for 4 straight weeks.

While the Steelers officially won the game by scoring more points, Browns coaches and team officials awarded themselves 1/2 of a win for scoring 2 TDs and gave all the players gold stars after the game for trying their best.

Williams and Stewart combine for 250+ yards rushing and 3 TDs as Carolina discovers a new winning formula: keep the ball out of Jake Delhomme's hands as much as possible.

Jamarcus Russell shows flashes of competence and Oakland does just enough to win a game that the Eagles should have dominated. This game tells you everything you need to know about the Eagles' chances of being a serious competitor this year.

After their Dr. Jekyll performance last week, the Seahawks turned back into Mr. Hyde as the offense sputtered against one of the worst D's in the league. Arizona manages to keep themselves relevant for one more week.

He's BAAAAAAAaaaaaaack! Brady and company set 164 NFL records in the 2nd quarter on way to a destruction of the lame duck Titans. Steve McNair showed more life yesterday than the Titans (BAM!!! 3 McNair jokes in a row).

In 3 weeks the Jets have gone from the belle of the ball to the ugly, lesbian-looking chick at the school dance who nobody wants to go near. Can somebody get Mark Sanchez some hand warmers and a cup of cocoa? I haven't seen a pussy that big since I watched the Pam Anderson-Tommy Lee honeymoon tape.

The Falcons make it official that they are for real and could very well be the best team in the NFC behind the Saints. Ryan wasn't great, Michael Turner did next to nothing, and they still managed to squeak out a win against a game Chicago team. That kind of win is not something you typically see from young teams, or NFC South teams for that matter.

The glass slipper falls off tonight as the Chargers finally solve the Broncos' defense and Antonio Gates has the monster night I need to finally get a win in fantasy.


MNF Predictions for the Season (Winners): 4-2
Posted by Unknown at 1:48 PM No comments: