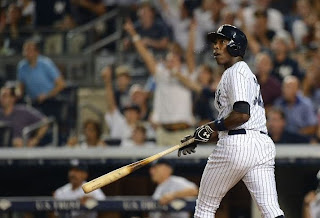 (Tried to pull his hand out of the way and moved it right into the ball's path.  Damn knucklers.  Courtesy of RAB)

The one bad thing to come out of last night's win was the injury suffered by Jayson Nix.  In the bottom of the 2nd, he took a knuckleball from R.A. Dickey off the left hand and was in obvious pain instantly.  He tried to stay in the game, but signaled to the trainer after taking his base and was removed from the game.  It didn't take long for the team to announce that the hand was broken and Nix's 2013 is all but officially over. 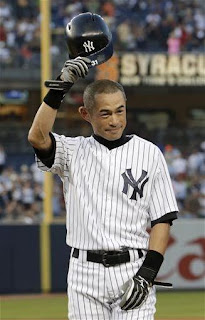 It was a potentially historic night last night at The Stadium.  Funny how those always seem to be happening there, huh?  Ichiro Suzuki entered last night's game 1 hit shy of 4,000 for his career, an accomplishment that has to be looked at with amazement and appreciation regardless of how they're split up between leagues.  Ichiro is simply one of the finest professional hitters in the history of this planet, and in his prime he was a joy to watch play.  He's well past that now, but even at 39 he can still show flashes every now and then with a 3-4 day or a perfect swing on a really good pitch that he drops in for a base hit somewhere.  A major individual milestone for him and another win against the Jays would have made it a damn good night.

- Ichiro took a lot of the drama over his 4,000th out early with a single through the left side in his first at-bat.  1-1 pitch, just got his bat on it and lined it through a hole.  So Ichiro.  The whole team coming out of the dugout to applaud and celebrate the moment was pretty cool, and Ichiro looked genuinely touched at first.

- But back to the game.  Spot starter Adam Warren was "ehhhhhhh" in his 3+ innings of work.  He put a runner on base in every inning, gave up a solo home run to somebody named Josh Thole, and was removed in the 4th after hitting a batter with his 61st pitch.

- The Yanks got 2 runs off R.A. Dickey in the first 3 innings to take an ever so brief lead.  Austin Romine hit a sac fly in the 2nd that could have been a 2-run homer, and Curtis Granderson had an RBI single in the 3rd.

- After Warren left, David Huff came on as expected.  What was unexpected was how brilliantly he pitched.  4 walks doesn't look great, but 5 scoreless innings does and that's exactly what Huff gave Joe last night.

- Dickey was even better after the 3rd.  He gave up only a single walk from the 4th into the 8th and only allowed 1 ball out of the infield.  He was devastating.

- The Yankee kept the 8th alive on a Robinson Cano single, and Dickey made his last mistake of the night on an 0-1 knuckler to Alfonso Soriano.  Soriano crushed it for a 2-run homer and the Yanks had the lead.

- Joe saved the rest of his bullpen with Huff, but he didn't play games with the lead and went to Mo in the 9th.  Mariano sandwiched 2 strikeouts around a double and a pick off to notch the save and make it 9 out of 11 for the Bombers.