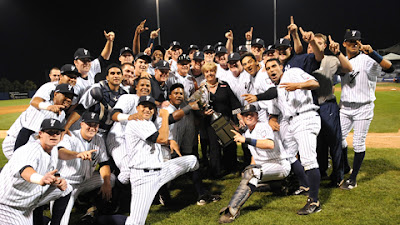 "I am comfortable with A.J.  He's extremely talented and has been inconsistent, but I can tell you I'm comfortable with the effort he's giving, I'm comfortable with everything that he does, the accountability that comes with him. Obviously, we signed him to have more success than he's having, but it's a competitive industry and as long as he's not going to give up on himself, then I'm going to have his back the entire way."

Wait, I think I've seen this before.  I know what happens next.  Billy Eppler and A.J. get on a boat and go out to fish in the middle of the lake.  Then there's a gun shot, A.J. is never heard from again, and the camera slowly pans back to show Cash sitting in his office looking out the window as the "Godfather" theme starts to play in the background.