The Sawx were taking no prisoners tonight after their dramatic Game 7 World Series victory over the Yankees 24 hours ago, and they clearly have their momentum going in the right direction towards their next title after tonight's dominant victory.

Dice-Gay was dealing from the start tonight, Wakefield backed him up with a couple solid innings of relief, and Dan Wheeler locked it down with a quick 9th inning.  Yes sir, the weekend series with the Yanks was just what the Sawx needed to right the ship and they are clicking on all cylinders now.  The rest of the AL better watch out.

P.S.- Why the hell is Tim Wakefield still pitching?  That guy was done like dinner after '09.  Guess everybody forgot to tell him.

P.P.P.S.- Less than 2 weeks into the season and the Magic Number is almost 1/10th gone to eliminate Boston.  That's just fantastic.
Posted by Unknown at 9:50 PM No comments: 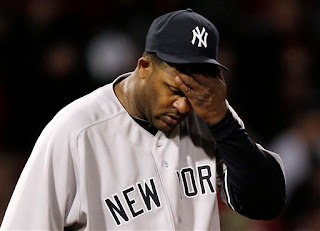 (I feel ya on that, CC.  Courtesy of The AP)
- I don't know what the deal is with Phil Hughes and his nonexistent velocity, but he and the team better figure it out and figure it out quick.  I still haven't seen one single reasonable explanation for why his arm is so dead, but when you throw a flat fastball at 88 MPH, you are going to get shelled and that's what happening right now.  I love the guy, but he flat out isn't giving his team the slightest chance to win when he's on the mound.

- I liked the version of Bartolo Colon I saw on Friday afternoon much better than the one I saw against Detroit.  His 2-seamer was dominant and he commanded it better than any Yankee pitcher has commanded any pitch this year.  There's no way to predict how long he can stay healthy and effective, but the more outings he has like that the better that signing looks.

- Hey!  You put D-Rob in the game and he does the job!  What a concept!  I know I said Soriano should have "Fireman" as his entrance music earlier in the year, but Robertson was all that and more on Saturday to preserve the Yankee win after Nova stumbled.  His 1.2 shutout innings practically earned him a guest spot in this upcoming season of "Rescue Me."

- Where have you gone, Mark Teixeira?  Last 4 games, including this Boston series- 0-15 with 7 Ks and 2 BB.  He looks like he's gone back to his classic April approach of pulling off of everything early, swinging too hard, and either completely missing or popping everything up.  How the hell did that happen so fast???

- That being said, the pitch that Teix got punched out on to end the game last night was complete bullshit.  That wouldn't have been a strike at Pedroia's knees let alone Teix's.

- Speaking of midgets, this series was a great reminder for how much I hate Dustin Pedroia.  9-13 in the series, 4 XBH, 4 R, 5 RBI?  Yeah, that's a pretty solid ownership of the Yankee staff.  And he does it all with that stupid swing that makes it look like the bat is too heavy for him.  I don't get how he does it, I don't want to know.  I just know that I hate Pedroia's guts and I hate him even more when he succeeds against the Yankees.

- I called CC's outing the worst 1-run performance in baseball history last night on The Book and I stand by that statement today.  He just didn't look like he had command of anything last night and he could never throw strikes inside like he said he wanted to.  After a few innings it looked like he abandoned that approach completely.

- THAT being said, he still held Boston to just 1 run, battled to get out of the problems he created for himself, and gave his team a chance to win.  Beckett just flat out shut down the offense.  Through 3 starts, CC has a 1.45 ERA, a 1.29 WHIP (inflated greatly by last night's 13 baserunners allowed), and an 0-1 record to show for it.  Can somebody score some goddamn runs for the guy???

- Was I the only one who had half a stack in his pants when CC hit Adrian Gonzalez last night?  I practically jumped out of my chair and ran to the TV to hear the sound of the ball smacking off his fingers in the replay.  Too bad it's not broken.

- Whatever his approach is at the plate, high stride, medium stride, no stride, whatever, the fact is Jeter's bat looks reeeeeeeeally slow at the plate right now.  He isn't getting around on any fastballs and he's mashing everything into the ground again.  Yes it's early, and yes it's too few at-bats to make any serious judgments, but he isn't passing my eye test right now and it's something worth keeping an eye on.

- Did anybody catch the BBTN portion of SportsCenter after the game?  Jesus Christ, what a bunch of loser fans!!  Out there freaking out behind the set like they just won Game 7 of the '04 ALCS.  Calm down, you morons!  Your team is still 2-7, your pitching is still wildly inconsistent and ineffective, and your offense still can't hit well with RISP.  If ever there was a perfect visual example of why I call them Fraud Sawx Nation, that was it.
Posted by Unknown at 8:43 AM 2 comments: