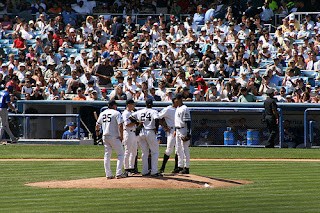 (Lotsa options for this situation this season.)
No time for intros here, people.  If you missed any of the series so far, too bad.  Catch up.
Mariano Rivera

What We Know: He's the man.

In typical Mo fashion, he showed up to camp, worked at his own pace to get into game shape, and then proceeded to come out and knock everybody's dick in the dirt.  Ho-hum.  Another year in the life of the greatest single performer at his position in any sport in the history of sports.

What We Don't Know: Will Father Time finally catch up to him?

Mo has managed to dodge wily old FT so far as he's moved into what should be the twilight of his career.  But injuries are always a concern, especially for a 41-year-old.  Surely this factored into the Yankees' decision to throw a bajillion dollars at Rafael Soriano as insurance, but we're all hoping it doesn't come to that contingency plan.

What We Know: He's a grumpy puss.

Dude has literally not smiled since he joined the team.  There's been reports that he hasn't really gotten involved with anybody in the clubhouse, and he stated that he didn't want to pitch against any AL East teams until the regular season.  So in terms of temperament, Mariano he is not.

What We Don't Know: If he can live up to his contract.

When he's on and healthy, he's one of the best relievers in the business.  But there have been plenty of times when he hasn't been either or both of those things, which would make the money he's being paid this year a bad investment on the Yankees part.  Plus, the fact that he's a whiny baby makes me a little concerned that he could become the next in line of players who couldn't handle playing in New York.

What We Know: He's the next in line after Soriano.

D-Rob has established himself as the 3rd pitcher in the bullpen pecking order, and with good reason.  He has great swing-and-miss stuff, he's learning to harness it to be more efficient with his pitches, and he has shown that the moment is never too big for him.  He'd be the setup man on most other MLB teams and could even be the closer on some.

What We Don't Know: How much work will he get?

We know that Joe is going to do everything to play the matchups and keep a consistent rotation so that everybody gets work and everybody stays fresh.  But we also know that when the starter gives a good performance, Joe is going to look to shorten the 'pen and go Soriano-Mo as much as he can.  How will D-Rob's stuff and command hold up to only getting a few batters a week here and there if it comes to that?

What We Know: His stuff looked better this spring.

Whether he was in good shape or not, Joba's velocity and bite looked good on his pitches this spring, which is a good thing for him and the bullpen depth.  Without this recent injury, he could have had his arm strength up to the point where he could reach 96-97 on the gun again.  That would be fun.

What We Don't Know: What the Yankees plan to do with him.

He isn't going to start, he isn't going to setup, and he isn't going to close.  Right now he's the 6th-7th-inning bridge guy along with D-Rob, which means he might have more value to the Yankees as a trade chip for teams looking to use him as a starter again.  So will they run him out there a lot to show his stuff to up his trade value?  Or try to hold onto him and let the market determine his worth by how the season plays out?  Or will they even trade him at all?

What We Know: There are 2 of them.

2 lefties is always better than 1.  Especially with the human DL stint, Damaso Marte, still sucking up payroll from the team.  Now the Yanks are covered in cases of injury or ineffectiveness.

Who is the #1 and #2 option?  How will Joe divide up work between them?  Is one guy going to be used as a LOOGY and the other as a workhorse?  Was Logan's second half in 2010 a flash in the pan?  Can Feliciano stay healthy after his workload over the last 3 years?

What We Know: The 'pen needs one.

You always have to have somebody there to suck up innings when you're on either side of a blowout.  And most, if not all, of the guys mentioned above are only good for 1 inning, 2 tops.

My money is still on Sergio Mitre, even though there are rumors going around that the team might cut him.  Garcia and Colon have each expressed slight interest in staying on as the long man if they don't get a rotation spot, but is that option attractive to the Yankees?  Don't even consider Mark Prior.  More than 1 inning of work and his arm will probably fall off of his body.
Posted by Unknown at 12:32 PM No comments:

Is This Really Happening?

Is that really Bartolo Colon out there on the mound?  Pitching not just decently or effectively, but pitching well?  6 innings of 2-hit, 1-run ball against the Rays?  With his fastball still sitting in the mid-90s in his last inning of work?  How the hell did this happen?  What was Colon doing in winter ball that showed the Yankees he was capable of doing this?  How did they manage to see through all the fat rolls, skin flaps, and man boobs to see that there was still some gas left in the tank?

And is Colon really going to win the 5th starter spot in the 2011 New York Yankee rotation???  With all that's going on in the world, the revolutions, the tsunamis, the global warming, that happening might actually be the final thing that leads me to believe we are heading towards the end of days.  I can't even wrap my mind around that thought.  I keep expecting my TV to cut to a shot of Morgan Freeman sitting in the oval office giving one of his speeches from "Deep Impact."

Seriously, though, I have to have the same tempered expectations for Colon going forward as I did with Freddy Garcia a few weeks ago, but I can't deny that Colon has been impressive this spring.  I would have been excited if he was able to make it out to the mound for first inning warmups without hurting himself or having a heart attack, and he has gone out and been one of the best pitchers in camp.