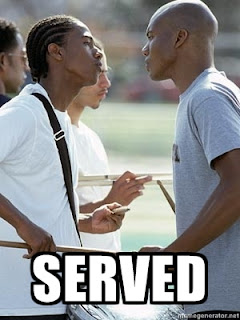 Love it.  Absolutely love it.  Whether he meant to or not, Jeter subliminally points out that by making the comments he did about "The Flip," Valentine basically buried Varitek's retirement, which should have been the real story.  And I don't know about you, but I found the "bored" comment very amusing considering all the drama surrounding the new regime and clubhouse beer ban in Fraud Sawx camp.  The only thing that could have made this better would have been Jeter cracking a beer and smiling for the cameras when he gave the answer.
Posted by Unknown at 7:18 PM No comments:

Searching Off The Radar For Prospect Value

(The following is being syndicated from The Yankee Analysts)

** If you're somehow ass backwards enough in your Yankosphere blog cycle that you would check AB4AR and not TYA on a daily basis, well then firstly I'd like to thank you for the support.  Secondly, I'd like to give you the opportunity to check out this post I did over there yesterday for Prospect Week, as I'm sure you missed it since it didn't originate from here.  And if you haven't been following the goings on this week over at TYA, I highly suggest you do so. **

There’s plenty to get excited about at the top of the Yankees prospect food chain right now. They have a small group of players who could step in and contribute at the Major League level right now, some in bigger fashions than others, and an even bigger group of players in the lower levels of the system with high ceilings who could fill the gap left at the top after the higher-level players move on in the next year or so. Check any top 10 or top 20 list out there and you’re bound to see a lot of the same names time and time again- Banuelos, Betances, Williams, Bichette, Campos, Romine, Sanchez. Beneath that top tier or two of Yankee prospects, there is another group of prospects who could develop into top 5 talent in the next few years, your Brett Marshalls, Slade Heathcotts, Tyler Austins of the world. The players I want to look at today are the guys beneath THAT group; the players who aren’t on many people’s prospect radars, if any at all. Part of the strength of the Yankee system is the overall depth at all levels, and there is value in this group of “off the radar” prospects that is deserving of attention. Here’s a quick look at five off-the-radar prospects worth keeping an eye on this year.