The Ace Is Back! 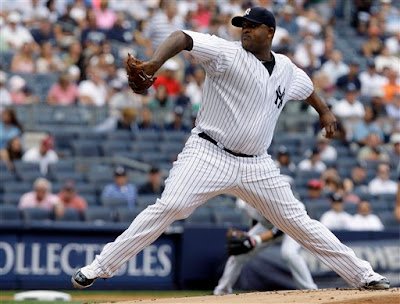 (Photo courtesy of The AP)
After the disaster that was the last 2 days, there couldn't have been a better situation for the Yanks today than to have CC on the hill with a chance to end the skid and salvage a win out of the series.  And the big guy did not disappoint.  8 innings of absolute lockdown ball, making the Mariners look like the feeble, weak-swinging team they actually are.  And he actually even got a little run support today.  How about that?

That's 10 wins now for the big fella and we can all start taking some of the All-Star talk that was being heaped on Phil Hughes and throw it Carsten's way, because the guy has been dynamite over his last 6 starts and 7 of his last 8.  He's got an ERA in the low 3.00's, a WHIP of 1.13 and a BAA of .225.  For all the talk about his rough spots in May (of which I was admittedly a part of), CC has been damn damn good for the overwhelming majority of the season.

And oh yeah, Robbie Cano is still stinging the fuck out of the ball, The Horse continues to kick up his heels, and Mo is officially not human.  Cut another game off the magic number, baby!
Posted by Unknown at 3:45 PM No comments:

Forget Cliff Lee, what's it going to take to get Felix Hernandez in a Yankee uniform?  Montero, Nova, and Betances?  What do you want, Seattle?

Dude is downright disgusting!  Jeter probably had nightmares last night after the game.
Posted by Unknown at 7:44 AM No comments: